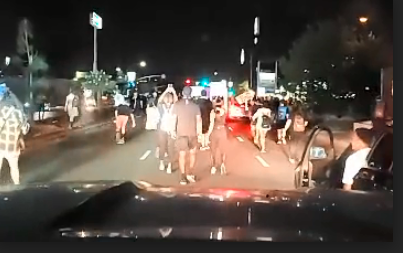 A black man struck by a car near downtown Bakersfield during a protest on Wednesday night has died, the Bakersfield Police Department confirmed.

Attorney Amar Shergill confirmed the death of Robert Forbes in an updated GoFundMe post, which was initially raising money for his medical bills. The funds will now be used to help pay expenses for his funeral, according to the GoFundMe page.

The BPD’s Major Collision Investigation Team is investigating this incident. Investigators have obtained video filmed by a community member who was trailing the main group of demonstrators as they marched westbound on California.

When BPD was asked if Moore would be arrested or charged with vehicular manslaughter, BPD said they were still investigating. BPD said in a news release the vehicle had its headlights on. It was traveling at a speed consistent with the flow of traffic.

Forbes was protesting Wednesday night with others in support and remembrance of George Floyd, a black man that was suffocated and died will in the custody of the Minneapolis Police Department.

Forbes was with a small group of protesters in the East bound lane when the incident occurred on California Avenue.

Megan, a protester who was with Forbes Wednesday night who wishes to be identified with her first name only, said she thought something had fallen from the car or that it had hit something else. She said she soon realized the sound was Forbes’ body landing on the ground after being hit.

“It happened right in front of me. The car hit him, and he flew seven feet in the air,” Megan said. “I will never forget that sound. It will always stay with me.”

Megan was one of the first to reach Forbes. She said he wasn’t moving. Shortly after, an EMT trained protester attempted to help Forbes.

The Bakersfield Police Department showed up shortly after the incident occurred. BPD has not identified the driver because no charges have been made.

Videos of the incident posted to social media show the driver is a white man. Officers can be seen speaking to him and standing in front of him facing protestors as the driver smokes a cigarette.

Protestors are heard shouting, “Cuff him,” and “arrest him,” to police as protesters demanded justice for what they perceived to be an intentional attack.

BPD eventually took the driver into custody, but he was shortly released after they ruled out any substances or speeding as contributing factors.

“It wasn’t an accident,” said Michael, another protester who wishes to be identified with his first name only. Michael said he was almost hit too and was barely able to get out of the way.

Michael said he saw the driver’s car coming and heard it accelerate, and he said he tried to warn Forbes who was standing next him.

Michael said the car moved left and right as it approached the protesters.

The driver, Timothy Kieth Moore, identified himself on Facebook when he posted a public apology on Facebook that has now been deleted. Moore said in the Facebook post he thought it was a DUI checkpoint. He said he was unaware of the protest taking place and pulled over immediately after the incident occurred.

“I prayed for the man, and I know our paths have crossed for a reason,” Moore said on Facebook. “I’m not sure why but they did, and I’m looking for the positive in this.”

Some say Moore has tattoos that indicate his affiliation with the white supremacy movement. This has not been confirmed.

BPD said a final determination for this collision will be made once all the evidence has been collected. Anyone with information regarding this investigation is encouraged to contact the Bakersfield Police Department at (661) 327-7111, or by emailing Officer C. Ott at cott@bakersfieldpd.us.

A petition has been started in response to the incident on Change.org, demanding Moore be charged for Forbes death. The petition has more than 73,000 signatures as of Monday morning.