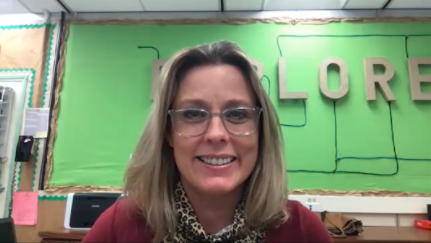 Shannon Zimmerman has unofficially won the seat for the Bakersfield City School District’s Board of Trustees, Area5.

According to the Kern County Elections Office, Zimmerman was leading by more than 600 ballots. These results were last updated Saturday.

Zimmerman has nearly 20 years of teaching experience and said she wants to create a student-based environment within the district. She hopes to do so by promoting 21st-century learning.

Zimmerman said it was her own personal experience that made her want to run for the seat.

“I had a rough childhood,” she said. “I ended up as an adolescent on my own. I had a girl friend, we held on to each other, and held on to the hope of a better life through education. We made it through together, and we held that vision of ‘education, education!’ To get a college education and get out of poverty, and we did. We both did it.”

Education was her way to a better life and has seen students who are in similar situations. She hopes to be the person to help them overcome adversity and champion through education, she said.

In regards to timing and deciding to run this election cycle, she explained how the lockdown solidified her decision.

“As the pandemic progressed, we saw a lot of damage to children in other ways, like depression, abuse, and malnutrition,” she said. “The solution to the problem became worse for the kids.”

If and when Zimmerman officially wins the race, her first priority is to get children back to school. She said parents were not considered when making the decision of distance learning. Her campaign message was centered on giving the parents and students options.

“We need to give parents a choice in education, from choosing if they learn online or in-person, to deciding if they go to a magnet, charter, or private school,” she told Kern Sol News. “I believe every family should have that right to choose which is best for them. We have a lot of failing schools and a lot of people in poverty don’t have a way out of that because they don’t have a choice.”

Zimmerman said she would like to see BCSD create more magnet schools.

She provided examples of science or engineering academies. For the past three years, she has been a Science Technology Engineering Arts and Mathematics (STEAM) Specialist. She understands every student learns differently and thinks STEAM provides a full rounding to STEM.

She believes her previous experience as a teacher for Pond Union Elementary School District in Wasco will allow her to be an effective board member. She knew each of her students had different needs and adopted educational technology tools to help differentiate instruction. As a result,
she partnered with The Wonderful Company to build her program, and she became a technology coordinator. She said many other districts began coming to Pond School to see Zimmerman’s implementation of both Google Apps and Google Chromebooks.

She has also worked at a STEAM academy and was hired as a specialist in the Chevron Lab at Castle elementary. Here, she helped develop the curriculum under the Next Generation Science Standards, which calls for a three-dimensional approach to K–12 science instruction: practice, crosscutting concepts, and disciplinary core ideas. With other teachers, she planned and co-taught reading and math through STEAM.

However, her new role as a board member will come with new responsibilities.

“It is so important what the (trustees) do for our district,” she said. “I was nervous about whether I was going to be enough. I know I don’t know everything, and I won’t enter knowing how it all works but the Superintendent really did a good job calling all the candidates and answering all our questions and preparing us what would happen if we did win.”

However, with these new responsibilities, she said she will keep one thing in mind when making decisions as a board member.

“The first and important way to do this is to keep the student and the families in the center of the decisions,” Zimmerman said. “Asking what is best for our students…They are what it is all about, it is about them. As long as the decisions are to benefit the students we will be good.”