Board of Supervisors hold public hearing on redistricting process 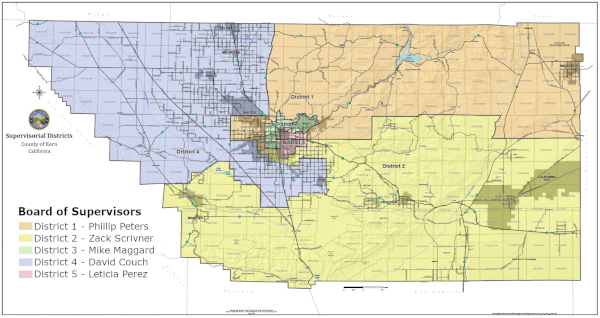 During Tuesday’s board meeting, the Kern County Board of Supervisors considered an item that included a presentation on final 2020 Census Data, a public hearing to receive testimonies on redistricting criteria and communities of interest, and provided direction on draft district plans.

During their February 23, 2021 meeting, the Board of Supervisors directed their staff to initiate the process of redistricting— something that occurs every 10 years.

With assistance from outside legal counsel demography experts, Jason Wiebe and Amanda Ruiz from the County Administrative Office (CAO), Deputy County Counsel Stephanie Bouey, and County Counsel Margo Raison have met, developed, and implemented a series of steps along the redistricting path in order to ensure that all legal processes and laws are followed.

“The purpose of today’s agenda item is to provide your board and the public with information about the Census Data and to receive additional public comment,” County Counsel Margo Raison announced during the board meeting. “At the conclusion of the agenda item, I will be asking for direction regarding preparation of draft maps.”

The County has provided various public workshops and trainings that have covered what redistricting is, training on the online redistricting tool, and workshops where they have received public comment and invited the public to submit their ideas about communities of interest. They also had maps available where people could draw and submit their redistricting ideas.

All written comments and maps were preserved and provided to demography experts.

Paul Mitchell of Redistricting Partners, a demography expert, appeared in front of the Board to share specifics from the Census Data and to provide insight on the next steps of the redistricting process.

Communities of interest was an important topic during Mitchell’s presentation as Redistricting Partners conducted outreach to engage with members of the public.

The California state law described a community of interest as a contiguous population which shares common social and economic interests that should be included within a single district for purposes of its effective and fair representation.

“And so when we see these communities of interest testimonies, we should be thinking of it in the context of how can this community be strengthened through the redistricting process?” Mitchell said.

Mitchell’s presentation provided examples of some of the feedback they had been seeing from the public:

Public comment was allowed following Mitchell’s presentation. Anyone interested in speaking on this item was given two minutes to make their comments.

Public comments were made from those who agreed with the current district lines and those that were in favor of a community drawn map— the Equity Coalition Map.

The Equity Coalition Map was drawn by the Kern Equitable Map Coalition, a coalition created by the Dolores Huerta Foundation (DHF) that consists of Kern residents and organizations whose goal in the 2021 redistricting process is equitable maps in Kern County.

“The DHF has been working on redistricting for the past five years,” Camila Chavez, Executive Director of the DHF, stated during the public comment portion of the board meeting. “We engaged with the Board of Supervisors on the Luna case to redraw the county districts in 2018. DHF then worked on the Kern High School District later that year, and Kern Community College District in 2020. DHF has trained, engaged, and empowered hundreds of Kern County residents in this important civic endeavor. Now we’re back to discuss the Board of Supervisors districts.”

Lori Pesante, who directs the redistricting program for the DHF, also provided a statement during the public comment section of the meeting.

“Many, many people—like myself and folks in the foundation—have been doing redistricting work because it seeks to tap into the power of the people over the course of 10 years,” Pesante stated. “And so, when we started meeting in January, we started finding other folks who also wanted to see the redistricting process put right what has gone very, very wrong in Kern County, and many other parts of the Central Valley.”

The Equity Coalition Map has a layer on it that includes racially restricted covenant information from the history department at California State University Bakersfield. This information, along with other equity indicators, was used to make sure that groups that have been systematically cut out of property rights and intergenerational wealth-building would be empowered by the redistricting process.

“Kern County is 65.7 percent people of beautiful color,” Pesante announced. “It has been a long trend to see this demographic shift here in Kern County. It is high time that our maps finally reflect that.”

The next redistricting hearing will take place on October 26, and the final decision on a map will be December 15.