DACA recipient reflects on what he has accomplished in 10 years

June 15 was the 10th anniversary of the Deferred Action for Childhood Arrivals program, also known as DACA; in 2012 President Barack Obama created DACA to allow undocumented minors to obtain a work permit for two years.

In the two years the permit is valid, it allows the dreamer to obtain a Driver’s License, get a job, and help support their families. Once the two years are up the individual must renew the permit again.

In 2012, 1.7 million undocumented immigrants qualified for DACA, and in August of that year, United States Citizenship and Immigration Services (USCIS) began accepting applications. In 2021 there were 590,070 dreamers still active.

Alexis Melo, a 22-year-old DACA recipient, explained that he has been living in the United States his whole life and feels he has given everything to the United States and all he wants to get in return is for this country to accept him and give him citizenship.

“I came here as a 6-month-old baby so legally my citizenship is in Mexico,” Melo stated. “I don’t know Mexico — I’ve never been able to go back and visit and I didn’t grow up in it. I grew up in America, in the United States; I grew up in these neighborhoods.”

Melo revealed that he lives in fear of infractions and people telling him to “go back to his county”— a country that he is unfamiliar with and that knows nothing about him.

Melo expressed his gratitude for DACA, stating the program has opened many doors for him.

“DACA has been the most important aspect of my life up to this point in the sense that, without DACA, I probably wouldn’t be where I am at today or have access to the resources that I’ve had,” said Melo. “For that, I am eternally grateful.”

Melo explained that DACA has been a blessing for him because he got the opportunity to attend college — something he wouldn’t have done otherwise. Melo graduated from the University of California, Davis where he obtained two Bachelor’s degrees and a minor.

“It’s given me the opportunity to go out and find a career in something I wanted to do because of my status,” said Melo.

Melo explained that he doesn’t want to stop his education at his Bachelor’s degree; he is currently in the process of attending law school at Santa Clara University. He wants to be a lawyer because he wants to help people who are like him. He plans to take advantage of everything the US has to offer as well as DACA.

“I think one of the biggest life lessons is that you don’t need to be contempt with what you have and you shouldn’t feel like that just because someone like you hasn’t done it before it can’t be done,” said Melo.

Melo emphasized the point that DACA taught him that you can do more and you can achieve more and that the only person stopping you is yourself. Melo said that he is succeeding in his life and he is proud of where he is today because of DACA and he is proud to call himself a DACA recipient. 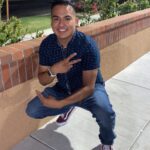