Weitz And Huerta Unite For A Good Cause 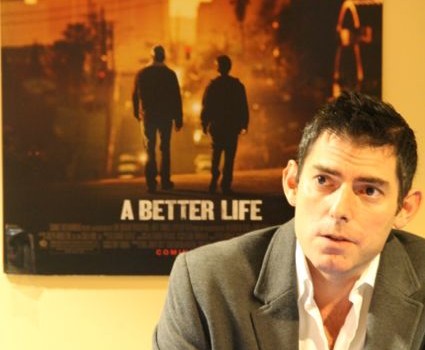 BAKERSFIELD—October 18 was a special day for the movie ‘A Better Life’ in Kern County.

Weitz is a renowned director, who has worked on a variety of films that range from ‘American Pie,’ ‘Twilight’ and ‘New Moon.’ And now he has taken on a new challenge to work on the movie ‘A Better Life.’

“(He’s a) new champion for immigrant rights on the big screen,” said Huerta.

Weitz openly expressed his reasons for taking interest in this film. He said that initially he took on this film because it had a great script. As he was on it he just kept getting more motivation. After having a conversation with Hector Verdugo, a boy from the area where the film was shot, he knew it was important for the crew to stay.

Also he said that he will keep working with this community and be involved with Legacy LA and Homeboy Industries, which were also a helping hand in the making of the film.

He said that he felt the movie “represented the area fairly without exploitation.”

Huerta had specific reason for choosing this film.

The movie is centered on the life of an undocumented gardener and his son. The film shows the struggles and triumphs of a single parent. Through hard work and sacrifice the parent secures their child’s future.

After working on this movie Weitz said he’s “committed to the cause.”

“Next film I’m doing is a short film on the situation in Alabama,” he said.

He elaborated furthered by saying that there’s fruit rotting in the fields and people pulling their kids out of school in fear that they will be pressured to speak out against their families because of new laws against undocumented citizens.

He expressed his disapproval of such conditions.

“This is not America,” he said, firmly.

Although the film has received a few negative comments Weitz shrugged them off as comments of misinformed and anonymous sources. He hopes the film will change the mentality of the opposition.

“I think Americans just need to know the reality of immigrants,” he said.  “That they need to know that immigrants don’t harm the economy, that all they really do is help, and take jobs that nobody else wants to take.”

Also he said, “it’s important to have respect and ethics and know where our families came from.” Weitz said the film has helped him reconnect with his Latino roots. He has a grandmother, who is a native of Oaxaca, Mexico.

“She is now 101 and was an actress of the 30’s. She’s proud that I was doing a movie depicting the struggles of immigrants,” he said, proudly. “I admire the pride that she takes in her nationality because she has lived in Los Angeles for 84 years and has not naturalized. She has pride in being Mexican.”

Weitz said that it meant a lot to him that Americans will get an opportunity to watch this movie.

Huerta said ‘that this is only the start.’ They plan on going to other places in California and Colorado to show the film.

Both Huerta and Weitz mentioned they hope people will benefit from watching this film and will help raise awareness and support to the fight for the ‘American Dream.’