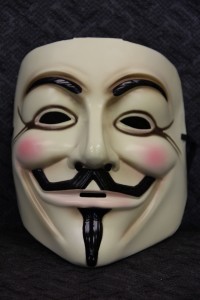 LAMONT–“Remember, remember the fifth of November

I see no reason why gunpowder treason

Should ever be forgot”

Is a quote explained by the character V (Hugo Weaving) in the movie “V for Vendetta,” where he says this quote in remembrance of Guy Fawkes (Guy Fawkes Day), who in 1605 devised a treasonous Gunpowder Plot to blow up the Parliament building to get rid of a tyrannical government ruled by James I. V wears the Guy Fawkes to hid his identity from the oppressive government, which the group Anonymous now uses as their emblem and symbol for freedom and truth.

Most news publications have called the group, terrorists and the ultimate destruction of our society. Though to others Anonymous is not a radical group but rather a form of liberation. They liberate them by using their voice and rallying up people so they can lead their revolutions. They’re against forms of oppression on expression or speech, through any form, whether it’s through the use of technological devices or verbally.

They made their first appearance in 2003, but their biggest appearance was with ‘Project Chanalology,’ where they protested The Church of Scientology after an interview of Tom Cruise was posted and removed from YouTube for copyright violation. The group took it as a form of Internet censorship.

As of 2011, they also began a war against the Organized Crime Class also known as elitists. This war is called #Operation Empire State Rebellion, where they plan to dismantle all global banks. Other operations have begun and are starting sooner than later.

Anonymous is not a coalition of crazy bandits as they’re described by their critics. It’s not a group of people. It’s in fact, an idea. Yet, if one was to ask, “What is Anonymous?” The answer is simple as described by them, “It is a collective of people, who besides their own beliefs and biases have an objective vision that unites them under one common desire for true freedom and a world rid of all oppression.’”

Currently, Anonymous has initiated ‘The Plan,’ #OpFullerton, and #Op OccupyWallStreet. ‘The Plan’ approximately began on June 15, it’s a three -step process where they hope to dismantle all forms of oppression and change the way our world system and government works through corruption and secrecy by corporations.

#OpFullerton began on Aug. 14, 2011, in Fullerton, Calif., where they responded to the fatal torturing of homeless man Kelly Thomas allegedly by Fullerton Police. Where they first began by dismantling the cities ‘interwebz’ removing the Fullerton Police Department site, if  Anonymous’ three demands weren’t met: “1. We demand the prosecution of Officers Jay Cicinelli, Kenton Hampton, Manny Ramos, Joe Wolfe, James Blatney, and anyone else involved in the gruesome beating, torture, and murder of Kelly Thomas. 2. We demand the immediate resignation of the Chief of Police in Fullerton, California. 3. We demand that the city of Fullerton immediately pay a lump sum settlement of no less than $5 million to the legal survivors of Kelly Thomas.”

Anonymous, the idea and the people, united against this unjust and corrupt world, governments and corporations can be the greatest thing to happen to people since The Civil Rights Movement, which exceptionally liberated people.

#OpOccupyWallStreet was planned to be initiated on Sept. 17, 2011, where they hope that they can have a peaceful assembly and protest against the Corporate Giants and the seeds of corruption that they sow around the world. As of Sept. 1, a group of peaceful yet outspoken individuals tried to have a gathering there and were forced to leave. Nine of them were arrested and acquitted of disorderly conduct. However, one was detained for two days in jail. They were acquitted due to the fact that the police was violating Freedom of Speech, Expression, and Assembly Amendment. Anonymous hoped to get 20,000 people to occupy Wall Street with them.

Anonymous does live by the ideal of living under a world of secrecy and regulation of people around the world. Using the Internet against governments that oppress its people, to rally up people and revolutionize is a great way to use our resources against the oppression. “‘We Are Anonymous. We Are Everywhere. We Are Legion. We Never Forget. We Never Forgive. Expect Us.’”

Opinions expressed in this column are those of Gibran ‘Gibz’ Moncayo, not necessarily those of South Kern Sol.