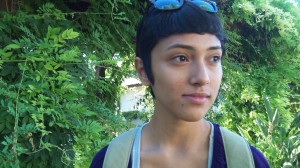 LAMONT–With her tousle hair and her infectious smile, Analleli Gallardo a 2011 graduate from Arvin High School looked forward to her first semester at San Francisco State University this fall.

During the summer before her move the 18 year-old, with a 3.33 GPA, toiled in fields to save up money for college.

“Not until it (the time to leave to San Francisco) came around the corner that I thought about the money,” said Gallardo. “(To pay for college) I thought of financial aid and scholarships, which didn’t cover much. I got $1,100 in local scholarships.”

At a small vineyard in Lamont she picked grapes for about a month and made less than $1,400. That’s a drop in the bucket for the estimated $24,000 she’ll need to make to cover for this year’s tuition.

Under the blazing South Kern sunrays, her health may or may not have suffered.

“I can’t just quit. I can’t be a quitter. I think about the money,” she said, in an interview in July. “I’ve hallucinated, so many times!”

Gallardo workday began at 4:50 a.m. where she dressed for work, slathered on sunscreen and grabbed a quick snack of milk and cookies.  Then she was off with her father to pick up other crewmembers.

Once they arrive it’s starting time!

Gallardo isn’t alone. She has seen half of work crew composed of high school freshmen or seniors.

In Sonoma this past summer, Daniela Angel, 18, tried to find a summer job even in farm work.  The Sonoma State University incoming freshman, who’s originally from Lamont, is trying to find a way to ease the burden of a $24,000  yearly tuition, including housing.

“The CSU Board of Trustees took action today to increase tuition by an additional 12 percent- or $294 per semester for full time undergraduates- effective in the fall.” as stated on the www. calstate.edu website.

Angel’s 3.83 GPA earned $2,000 in scholarships and she qualified for financial aid. However, Angel knows this money will not pay for everything.

“FAFSA covers housing and tuition, but not book service, you still gotta come up with the money,” she said. “If I can’t get a job, I’m gunna have to talk to my parents and figure this all out.”

Like Gallardo, Angel too knows of other high and college-age youths, who turned to field work as a summer job or a way to pay for college.

Gallardo and Angel both remain optimistic that they’ll be able to find a part-time job during the school year to help pay for college. However, Angel knows what will happen if the money is not there.

“If I can’t get a job, I’m gonna have to talk to my parents and figure this all out,” said Angel, “…money shouldn’t be an issue for a higher education.”