Arvin High Has A Lot Of Talent 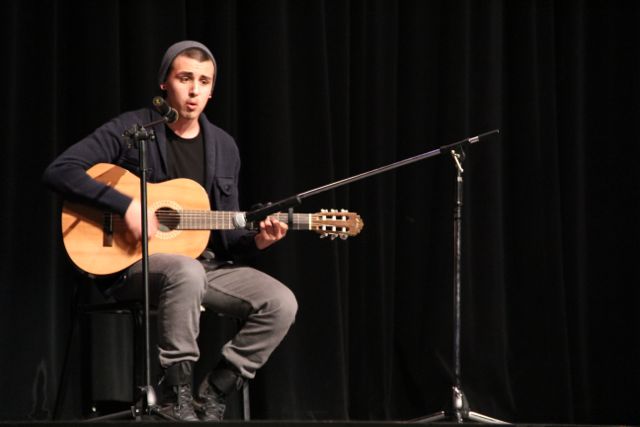 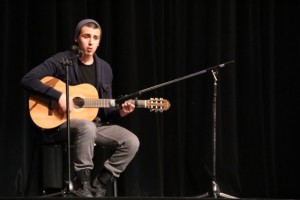 Antonio Aceves dedicated his performance to his late father./Photo by Jose 'Pablo' Antonio

The talent contest consisted of 22 different performances from comedy to singing and even a drum battle.

The event started at 6 p.m. promptly at the Arvin High School Auditorium. Masters of Ceremonies Cathy Miralda and Brianna Williams welcomed the approximately 100 guests and presented the judges of the night.

Many of the guests were excited to see what Arvin had to offer. The first performance was Laura Rodriguez, who sang for the audience. A stand up comedian followed “whose jokes were so bad that they were funny,” said Ivan Orozco, a Link Crew advisor.

The audience still got a blast out of it.

The only dance performers were Los Vaqueritos. “We were signed up due to us being in a dance group from school, since last year,” said Jaqueline Zamorano.

That decision resulted in a good choice due to the group winning first place and taking home a $100 gift card.

The Talent Show was created three years ago by the Academic Decathlon advisor Katherine Hays after she asked for help from the Link Crew, since they had manpower of many students willing to help. The first two years did not go as planned, but the third year may have been the best.

Judges were enthralled by the drum battle between two of the most talented drummers in the school Jose Zepeda and David Munoz.

Even though that Munoz had not played his drums for “about five months,” but after playing he believed that he did “a couple mistakes that were in my part.” 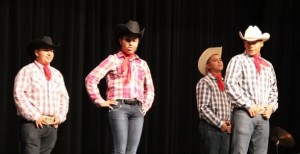 At the end of the day they both took third place, sharing a $25 dollar gift card as their prize.

Choosing the winners of the talent show was the tough decision for the judges. Mary Alice Finn, activities director and history teacher was “surprised by all the students, showing their acts to the rest of the student body.”

The performer that Finn was really impressed by was a senior named Antonio Aceves.

“(He was) playing and singing without missing a note,” said Finn. She believed that he also looked like a real professional.

Aceves took second place and dedicated his song to his father, who had died.

Advisors and leaders of Link Crew felt like they have stated a tradition. That will keep on going even after students graduate and teachers retire.