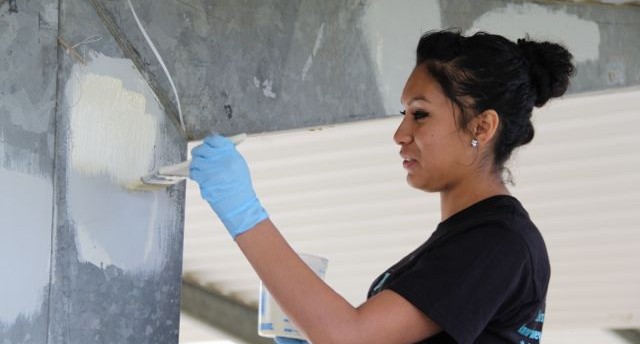 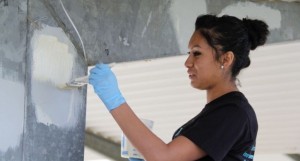 Diana Cisneros from Greenfield paints over graffiti./Photo by FABIAN GONZALEZ

During a training at Fresno in February, Sarah Reyes, senior program officer for The California Endowment, informed those present that each community could do a Spring Project and TCE would help them with the funding. The communities present at the session were Merced, Fresno, Coachella and South Kern.

After the participants arrived back from the conference, they informed the rest of the youth group about the community project. For the next few weeks the youths met and brainstormed ideas.

Amerika Niño, the Building Healthy Communities of South Kern Youth Leadership and Advocacy Collaborative Coordinator, suggested that they to “aim high and that we dream big.”

When the brainstorming was complete. The youth felt that graffiti and park clean ups were necessary in South Kern. South Kern includes the areas of Arvin, Lamont, Weedpatch and Greenfield.

“South Kern youth are really ambitious and they want to see the community more involved in being that part in creating that change,” said Niño.

Youths, who live in South Kern said that many parks are not well maintained. Most of the equipment is broken or has been stolen. Also, some don’t feel safe because people doing drugs, gang activity or violence.

Arvin Youth Maria Pantoja is up to the challenge. Pantoja feels it’s hers and residents responsibility to take action to improve their communities.

“The bottom line is that we are the citizen, who live in this communities,” said Pantoja.

The clean ups will take place starting on April 3 at Rexland Park located in Greenfield and Weedpatch Park. Then on April 4, youth will clean up DiGiorgio Park in Arvin and Lamont Park. On April 5, youth will host a sports day, followed by a dance at the Lamont Boys & Girls Club in honor of their efforts.

“It’s just a way for youth to start getting involved with their community and see how great it feels to improve your community health,” said Iris Salazar, a youth group member from Weedpatch. 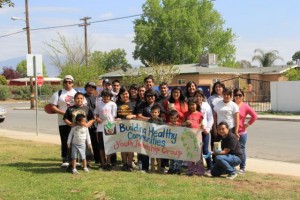 BHC Youth Group of South Kern hopes to make changes within their community./Photo by FABIAN GONZALEZ