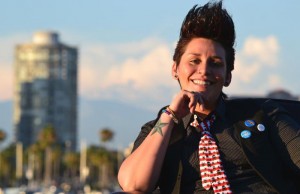 Tiaras, ball gowns, swimsuits—these feminine items are what people think of when conjuring the image of a beauty queen. Janelle Hutcherson didn’t see that though. Instead, she saw mohawks, tuxedos, and tattoos. Having recently competed in the Miss Long Beach Pageant, Hutcherson has been lauded by the LGBT community and others for being open about her sexuality.

Hutcherson, who identifies as a masculine lesbian, first made headlines a few weeks ago by invading the traditionally feminine space of beauty competitions. Instead of wearing gowns and dresses, Hutcherson appeared on stage in a tuxedo and a two-piece swimwear of her own design. Clearly distinguishable from the rest of the contestants, Hutcherson relishes in the fact that she offers a different perspective on beauty.

“I’ve dealt with a lot because of the way I look, and I feel like it allows people to hear me before they see me,” says Hutcherson.

The 26 year-old resident of Long Beach spends her days working as a hair stylist and initially received the idea from one of her clients who coordinated the Miss Long Beach Pageant. He wanted to show the cultural diversity of Long Beach and suggested that she run during a conversation with Hutcherson.

“He said he never wanted anyone to feel like they couldn’t enter because of the way they look. I pretty much had no reason not to do it.”

Bullied as a child for her masculine expressions, Hutcherson remains vocal in promoting equality. She hopes to inspire youth the world over through her representation of Long Beach’s LGBT community. Hutcherson was instrumental in the formation of the Mentoring Youth Through Empowerment (MYTE) program at the Gay and Lesbian Center of Long Beach, a mentorship program for local gay youth that provides access to an informed and positive role model. These mentors help the youth to identify, address, and find solutions to problems that they may face. This can range in everything from coming out to bullying.

“When I was a kid I wished I had program out there or people out there that I could relate to. I went through a lot of the same issues people go through today.”

Hutcherson has received lots of support not only from the LGBT community, but from the pageant community as well. She faced little hostility and was often commended by others for her motives.

“There was so much energy in the people that believed in this. It captured so much attention. It wasn’t so much the idea of I deserve to be here or I have to be here. I didn’t want to bully my way [into the pageant].”

If anything, Hutcherson sites herself as her greatest critic.

“There was a huge part of me that felt very vulnerable. It’s kind of a head game. You kind of have to battle yourself.”

She is currently working to create a swimwear line designed for people who don’t feel comfortable in the bikinis typical of pageants.

“I never really felt comfortable [wearing] anything from the market. I’m not a bikini girl for sure. Nothing has really been comfortable to me, so I created my own swimsuit. It was really true to me. Many people of different backgrounds are able to identify with that same feeling.”

Also, she intends to sell her custom-tailored tuxedos and, with the proceeds, she wants to start a scholarship for youth. The swimwear line and scholarship are in the early stages of formation, but have garnered attention from local youth who are interested in the pursuit of both.

“She’s a really big inspiration to us kids. I was definitely in the front row cheering her on the whole time,” says Victor Perez, a youth involved with the MYTE program.

Aside from Hutcherson, Mollie Thomas was another openly lesbian contestant who participated in this past pageant. Although she was out, her sexuality was not a focal point of her campaign. Thomas, appearing more traditionally feminine, at no point hid her sexuality though.

“I like that people can see the diverse lesbian community up and down that stage. I applaud her for being herself,” says Hutcherson.

The title of Miss California has not been one that has avoided controversy. In 2009, Carrie Prejean, former Ms. California, received media attention for her opposition of same sex marriage. Although neither out contestants won the pageant, their acceptance demonstrates the progress of the institution and perhaps that of society as a whole. In the arena of LGBT rights, for example, a Gallup poll shows that a majority of Americans now support the legalization of same-sex marriage.

Despite not winning the crown of Miss Long Beach, Hutcherson was awarded the title of Miss Downtown Long Beach. Hutcherson has announced plans to compete in the Miss California competition.