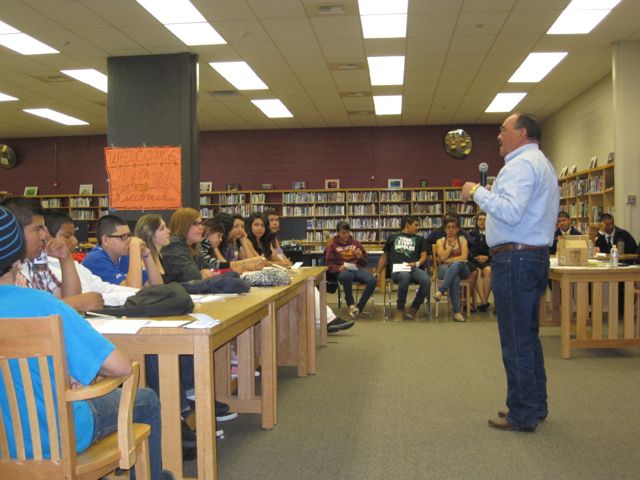 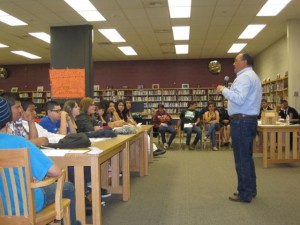 Vice President of the Bank of the Sierra Anthony Mungary talks to a group of Arvin High students./ Photo by STEPHANIE ESPINOZA/South Kern Sol

“It’s basically a school within a school,” said Donald Mills, department chair of Agricultural Program and Environmental Horticulture Academy Coordinator at Arvin High School.  “We recruit sophomores and then we taken them into their junior and senior year and they have the same teachers all three years.”

The Environmental Horticulture Academy is in its second year of operation at Arvin High and recently hosted two guest speakers for about 80 students in the program.

Anthony Mungary, vice president of the Bank of the Sierra, spoke about his job in banking and gave some advice to the students.

“I use to be an agricultural lendor,” said Mungary.  “I really enjoyed going out into the ranches (in Kern County).”

Today, he continues to work with farmers in Kern County as well as with foreign investors from China and Japan.

Had it not been for his high school agriculture teacher, who pushed him to go to college, he probably never would have ended up where he is today.

“More than once I was told that I wouldn’t succeed,” said Mungary.  “It’s all a matter of what you think you can do.”

“I always had a natural curiosity of how things worked.  That fed my motivation to pursue a degree in the sciences,” said Riccomini.  “It (sciences) gives you the tools to understand how your world works around you.”

Riccomini gave some advice for those students seeking a career in agriculture.

“The most critical thing in agriculture is the huge onslaught of laws that farmers aren’t used to having…the agricultural industry doesn’t have this type of culture,” added Riccomini.
After the presentations, students got the opportunity to ask the guest speakers any questions they had.

Jasmin Silva, an 11th grader in the program, attended the guest speaker presentation.

“I really liked it.  It gave me a perspective and it showed me how to do banking in agriculture and how to take care of your food,“ said Silva.

In addition to having guest speakers, students in the Environmental Horticulture Academy also get to enjoy field trips to colleges and universities throughout the year.