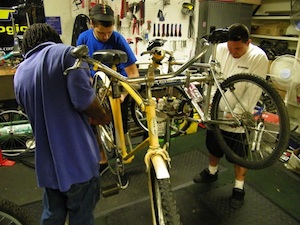 BAKERFIELD – Bike Bakersfield will host a two day-event to get families on their bikes.

Bike Bakersfield is an organization in Bakersfield that promotes safe routes to school and riding bikes as a form a transportation to get your daily exercise while helping your environment.

Patrick Orozco, Safe Routes To School Coordinator for Bike Bakersfield, grew up in Greenfield.  Orozco said he would give back to the community by hosting events in South Kern to get youths to ride their bikes.

Orozco smiled when he remembered all outreach opportunities Bike Bakersfield has participated in. They’ve hosted a Bike Rodeo event for the children at the Lamont Boys and Girls Club.

“Its always great to see their faces,” said Orozco. “It’s what (makes this) community event so special.”

Orozco’s main concern is that there are not enough bike lanes in South Kern. Many of the roads in the areas of Lamont, Weedpatch, Greenfield and Arvin are unpaved.

“Growing up in Greenfield, I always wondered why aren’t there people riding their bikes,” said Orozco. “In Greenfield there’s a lot of dirt roads, no place to walk or to ride your bikes safely.”

On Saturday, May 19 at 9:30 a.m. with the 2nd Annual Bike Festival, which will include activities throughout the day like a bike swap meet, BMX Demonstration, arts and crafts and live music. Plus there will be opportunities to participate in a game of Bike Polo or a Bike Rodeo. On Sunday, May 20 is a Downtown Criterium or race through downtown Bakersfield.

Bike Bakersfield is a nonprofit organization that takes donated bikes. The donated bikes are given place in the ‘Bike Kitchen,’ which is a repair shop. People then can work toward owning their bike by repairing one.

Jonathan Moo, Safe Routes To School Coordinator for Bike Bakersfield, enjoys riding his bike everywhere. Moo said he too would like to see more youth in South Kern riding their bikes.

“A lot of areas from one area in South Kern to another is very scenic,” he said. “My question is ‘why don’t people ride their bikes?’ ‘Is it because of the lack of bike lanes?’”

For more detail on the events or Bike Bakersfield, please visit www.bikebakersfield .org