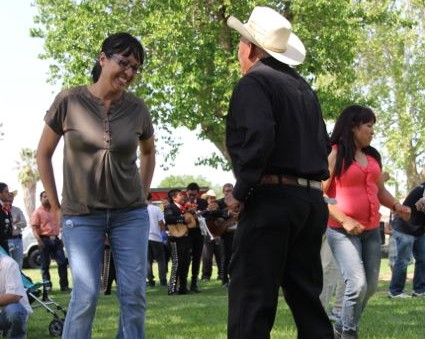 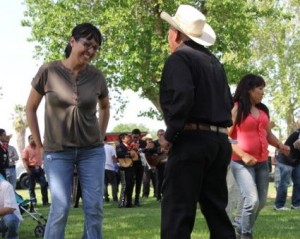 Leticia Perez dances with an elderly man during a campaign rally at Lamont Park./ Photo by CLARA BRUNO/South Kern Sol

LAMONT—With the June 5 primary elections only days away, 5th District Supervisor candidate Leticia Perez is not slowing down.

Perez, who hopes to unseat the current 5th District Supervisor Karen Goh, has been campaigning door-to-door in the areas of Arvin, Lamont and east Bakersfield.

”This election is an opportunity for them to place someone in that seat that they believe is going to fight for them and their interests. I believe I am that candidate,” she said. “I am committed to the families of East Bakersfield, Arvin, Lamont. As my own family is one of those families.”

Perez feels at home in the communities, she hopes to represent. She was raised in east Bakersfield. Upon passing her bar exam, Perez came back to Bakersfield to work at the Kern County Public Defender’s Office as an attorney. She’s a graduate from UC Santa Barbara  and obtained her juris doctor from a law school in Indiana.

Perez said she likes to go door-to-door and introduce herself as a candidate. Her team is made up of volunteer supporters that help her campaign. Occasionally, voters will get to meet her 14-month-old son Jude.

“The community needs a voice on the Board of Supervisors. They need to know that people are listening to them and people understand their particular situation and are willing to work within the community to find solutions,” she said. “So when I look at voters, I want to know how they can help educate me to be a better leader in their community because I believe the community has the solutions to their problems but we have to actively engage the community and get responses and feedback from them, so that they are incorporated in every stage of the process.”

Goh, who was appointed by former Gov. Arnold Schwarzenegger, isn’t the only competition Perez faces. Arvin Mayor Tim Tarver is also in the race for 5th District Supervisor seat.

Perez and her husband, Fernando Jara are invested in their community. Jara is currently going through the full-ordination process for the Disciples of Christ. He is also the founder of Rockhill Farms to help reform those, who are often shunned in the community.

“Rockhill empowers former felons, gang members, and recovering addicts to become positive contributors to society through a residential reentry program of vocational, educational, and spiritual training on a sustainable-living organic farm,” according to Rockhill Farms’ website.

However, Perez asserts the voters must make it to the polls and vote.

“Su voto es su voz. Your voice is your vote,” she said.