In California, Students and Parents Prefer the New School Lunches 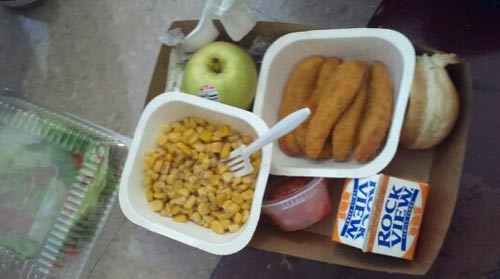 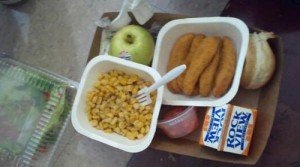 New America Media, News Report, Suzanne Manneh and Jacob Simas, Posted: Oct 18, 2012
By a ratio of 3 to 1, public school students in California say the new healthy school meals being served up in California’s K-12 public schools are better than what they’ve had in the past, according to a survey released today by The California Endowment, a private, statewide health foundation.

The poll provides an early measure of how the Healthy, Hunger-Free Kids Act — passed by Congress in 2010 and implemented at public schools across the nation on July 1, 2012 — is being received by those  it impacts the most.

Health and education advocates have lauded the new legislation as a major step forward in the national movement to improve the health of school children. It raised nutritional standards by increasing fruit and vegetable options, eliminating trans fats, emphasizing low-fat and non-fat milk, increasing the number of whole grain products, and setting limits on calories and sodium levels for school meals.

Nutrition experts from the Institute of Medicine and the United States Department of Agriculture developed the new guidelines, which advocates say will not only lead to healthier kids, but happier and higher performing students at public schools across the nation.

“If today’s students eat better and live healthier, we all benefit over the long run, in lower obesity and diabetes rates, reduced health care costs, and improved academic performance,” said Judi Larsen of The California Endowment.

Public schools across the country have had two years to prepare for the implementation of the new federal guidelines. Due to the time and effort exerted by many of those schools to establish compliant meal programs, a fair amount of anticipation had built up around the question of how the healthier meals would be embraced by students.

In two separate polls, conducted over a 10-day period in early October, 509 public school students aged 13 and up, as well as 600 parents of children enrolled in K-12 public schools, were asked whether they thought the current school meals were an improvement over the old ones, and whether they approved of the new federal nutrition standards.

As for the new federal nutrition standards, 82 percent of the students said they support retaining the changes, while parents approved of keeping the new guidelines at an even higher rate — 91 percent expressed support. Those responses were collected after survey respondents were read a short description of the new guidelines.

However, overall awareness of the new federal nutrition standards was low among parents in general. Only 36 percent of parents surveyed were aware of the new school meals policy, compared to 73 percent of students.

The results also suggest that when it comes to healthier lunches, taste still matters. In that regard, one piece of data from the survey indicates that there still may be room for improvement: 60 percent of surveyed students said they regularly throw away a portion of their school meal, although there was no way to extrapolate from the survey whether they did so because of bad taste or other possible considerations, like lack of time or unappetizing presentation.

Survey participants were also asked about whether they thought the new federal guidelines should be expanded to include “competitive foods” – items available on campus that are served outside of the school lunch plan – such as sodas, chips or other items available for purchase at snack bars. On this question, overall support was nearly identical, with 66 percent of parents and 65 percent of students supporting the idea. However, parents expressed “strong support” at a higher percentage (44 percent) than the students (24 percent).