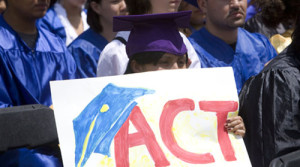 Nearly fifteen months after the Obama administration announced Deferred Action for
Childhood Arrivals (DACA), approximately half of all eligible immigrants in California have yet to apply.The program offers temporary legal status to qualifying undocumented immigrants who entered the country at or before age 16, and who have lived in the United States continuously since 2007.

According to the Migration Policy Institute (MPI) there are approximately 300,000 individuals who meet DACA’s age, educational, and other eligibility criteria in California. Just under half of those had applied as of June 2013, according to MPI.

Although the application fee of $465 has been attainable for many individuals, in part given the employment opportunities that can open up once one receives a legal work permit, many immigrant families don’t earn enough to afford the fee.

It took over a year of saving for Martha Lopez, 18, a recent high school graduate living in Bakersfield, took be able to send in her DACA application.

“I couldn’t afford [to apply] because I didn’t have a good paying job. [I was getting paid] between $7 and $16 a day, so it was hard for me to pay the $465,” said Lopez. “I was going to school and working about 12 hours per week, so money was very short. I had to pay for tuition, room and board, school supplies, transportation, food, bills and other expenses.”

Another DACA-eligible immigrant living in Bakersfield, a 29-year-old who wished to only give her last name, Gonzalez, due to her undocumented status, shared a story similar to Lopez’s.

“I didn’t have the money, since my partner is the only one that works, and that money is to support our family,” said Gonzalez, who waited several months while gathering the money for the application fee.

While Lopez and Gonzalez were eventually able to save enough money to apply for DACA, that hasn’t been the case for one young immigrant in Fresno, who also offered only her last name, Gutierrez.

Gutierrez began the DACA application process, only to have it halted because her family did not have the funds to cover the cost of her application fee. “The process started with filling out papers, but it (eventually) requires spending money too. This is where I stopped completing the (DACA) process.”

The young woman said that she did not have a Mexican passport, a requirement when applying for DACA. Obtaining the passport, she said, would have cost her an additional $80. “If I wanted to continue, I would need almost $600 to process the rest of my paperwork. This was money that my parents did not have. So we took a little break while we tried to save.”

Gutierrrez’s parents planned to wait until they received their tax returns, to pay the fee and complete the process for their daughter. That changed, however, when the father saw an opportunity to improve his family’s lot by opening a small business.

“All of our money, including the savings my brother and I had, was put into that store, which I proudly stand by with my family,” said Gutierrez. However, she said, that meant “my [application] was put once more on hold, because we lacked the money.”

DACA does offer the possibility of a fee-waiver, but it is only for very special cases.

According to U.S. Customs and Immigration Services (USCIS), one must be under the age of 18 and also meet one of the following requirements: being homeless, in foster care or without any support from parents or family, having an income less than 150 percent of the U.S. poverty level, or not being able to care for oneself because of a chronic disability, among others.

For Jovana Lopez, 28, of Bakersfield, the high cost of the DACA application led her to organize a food and bake sale, which ultimately allowed her, and other applicants who got involved, to cover the fee. “Selling chocolates, cookies and food might sound ridiculous to raise funds, but thanks to the support of many, this helped us to pay for our DACA applications,” she enthused.

Cost isn’t the only reason DACA-eligible immigrants are not applying. Some remain unaware of the program, don’t know where to obtain the application and supporting documents, or have difficulties completing the application once they have it.

“I read over all the paperwork, which must have been more than 15 pages. I understood none of it,” said Gutierrez. “The questions were extremely vague. In the end, once my father got tired of hearing my excuse of not being able to understand, and reading it over and over in front of him, he decided that we should wait until we could [have someone explain it to us],” said Gutierrez.

The forms needed to apply for DACA can be obtained through the USCIS website, along with detailed information about what is required to complete them, and details about the legislation including guidelines for eligibility.

Maria Olaguez, an Immigration Attorney who practices in Kern County, said many of her clients are confused by the application process, or scared that a misdemeanor or minor legal infraction may disqualify them or even lead to deportation.

Olaguez advises Dreamers and other immigrants who think they may qualify for DACA to seek legal advice from an attorney before filling out their application.

“There are attorneys who are willing to help Dreamers for low cost,” said Olaguez. And, “not every crime or infraction disqualifies you from DACA,” she added.

Greater security, for those who get it

“I feel more secure and worry less,” said Luis Ojeda, 23, a recent Political Science graduate, who applied for DACA last December and received his approval five months ago. “I have been able to take advantage of the deferred action benefits to further my involvement in the community,” said Ojeda.

“Now that I have a work permit, I’m able to apply for better job positions with a higher salary [and] I have a driver’s license, [so] I’m less afraid to drive and go places,” said Jovana Lopez, who was only working 12 hours-per-week, prior to receiving his work permit.

Martha Lopez, who is still in the process and has not yet received her approval, shared, “I hope with this permit my life will change for the better by getting an education and a better job.”

Additional reporting contributed by The kNOw Youth Media in Fresno.