Op-ed: Where’s the ENDA Celebration? The case for getting wild over ENDA’s Senate vote. 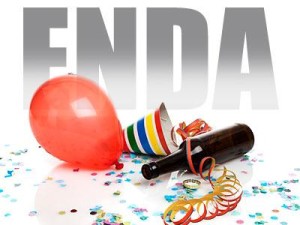 Four months after the greatest Supreme Court victory for LGBT Americans in history, we won our greatest legislative victory in the United States Senate: passage of the Employment Non-Discrimination Act, which would make it illegal to fire someone for no other reason than being gay, lesbian, bisexual, or transgender.

There was one big difference between both events.

With our Supreme Court victory, streets overflowed with celebrations and Facebook feeds were appropriately covered in red equal signs and saturated with YouTube marriage proposals and happy couple photos.

With our Senate victory: crickets.

The passion gap makes a disheartening statement about the breadth of our dedication to all members of the LGBT community.

Workplace discrimination laws in San Francisco, Los Angeles, New York, Chicago, and Washington, D.C., protect LGBT people. So being fired from your job solely because of who you are and whom you love is an alien concept to many LGBT people in or around America’s more privileged and highly educated urban centers.

People who would benefit from passage of a federal workplace antidiscrimination law live mostly in rural and suburban areas, and largely work in blue-collar and service industry jobs. They live in a vastly different world than gay urbanites.

Marriage became a finish line for many. Many others haven’t even gotten out of the starting gate.

Interestingly, marriage and ENDA have historically been politically and culturally intertwined.

The movement for marriage truly took off long after the strategy to focus on workplace discrimination was hatched in the early 1990s. Those of us who helped create that strategy (I was political director at the Human Rights Campaign from 1993 to 1997) had doubts about an additional effort to make a major push on marriage. One step at a time, we thought. I was wrong.

The movement for marriage captured the imagination of gay and straight people alike. If marriage is the ultimate endeavor of human civilization, then equality in marriage was essentially equality for our humanity.

But it was the workplace that played an important role in getting us to this place. Will & Grace helped — but it was in offices, on the market floor, behind the serving table, and in the quarry that many straight people got to know gay people in person for the first time.

As cities and states passed antidiscrimination laws throughout the ’80s, ’90s and 2000s, major corporations began instituting their own antidiscrimination policies. Being out and having job security were no longer mutually exclusive. Our straight colleagues became our friends, and as the marriage movement swelled, they were among our best allies at the ballot box.

That’s why passage of ENDA though both houses of Congress is crucial for the marriage fight in Oklahoma, Texas, Mississippi, and the many other states where it is still legal to fire a star employee because he is transgender, because she was spotted on a date with another woman, or because he is merely suspected of being gay.

It’s in part why those of us in the LGBT community who are guaranteed a portfolio of equal rights must engage in this fight. It may not affect us in our lives directly, but it affects the livelihood of millions of us who need our support. For them, this week’s victory in the Senate deserves a lot of Facebook love, mad tweeting, celebrating on the streets of the Castro and Chelsea and an even bigger commitment to bringing all Americans within equal protection of the law.

DANIEL ZINGALE is senior vice president at the California Endowment.  He was political director of HRC when the strategy and legislation around ENDA were first created