“This Used To Be the Park You Avoided” 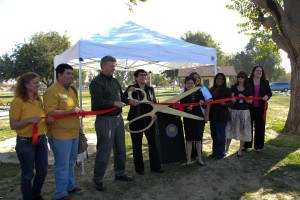 BAKERSFIELD, Calif. — This past Thursday, community members and local leaders gathered for a ribbon-cutting ceremony at Rexland Acres Park in Southeast Bakersfield, to celebrate improvements that intend to make the park a friendlier place for families. In recent years families had abandoned the park, which had become a popular hangout for gang members. Drinking and drug use at the park was not uncommon.

The improvements include a pedestrian path that allows easy access through the park, fresh lines and markings on the basketball courts, a repaved parking lot with parking space striping, along with a new bench and permanent trash-can. While seemingly modest, residents say the improvements will go a long way toward making the park a safe and welcoming environment for the community.

“The kids need something to do besides TV and [they need] a place to go to play that’s also nearby,” said Yolanda Martinez, mother of two. “So people keep coming here to get together and get to know one another, we need more improvements to our parks.”

Community leaders spoke about the obstacles they and the community overcame together to make what began as just a hope into reality.

“This wasn’t just the accomplishment of [Kern] County Roads,” said Craig Pope, the director of Kern County Roads. “We had to bring together parks and recreation, Building Healthy Communities, and local businesses like Griffith [Company] to make this happen.”

And though the changes are small, the effort and time that went to implementing these changes was arduous.

“About three years ago the community and an organization [Greenfield Walking Group] came to us and told us, ‘we want this park improved,’” explained Bob Lerude, Director for Kern County Parks and Recreation. “We held a community meeting to develop a master plan for the park, and one of the things that was mentioned was a walking path through the park, huge potholes in the parking lot, connecting the park to the sewer, and smaller things like additional benches.”

No matter how many amenities a park might have, they would be useless if residents didn’t feel safe to use them, said Lerude. Community leaders said they believe that by drawing more families and children to use the park, the park will become less of a magnet for crime.

“Restricting tobacco and alcohol use is important,” continued Lerude. “We bring out increased enforcement and patrolling to make sure that people aren’t drinking and smoking so the park isn’t littered with cigarette butts or broken bottles.”

Manny Ruiz, father of three, says that while the park is safer, not enough has been done to keep the peace in the surrounding neighborhood.

“I’ve been a resident here for 13 years and this used to be the park you avoided,” Ruiz explained. “But aside from the park improvements, one thing that needs to be done is greater presence of law enforcement for the whole area. We’ve even had street racing at five in the afternoon, but with increased enforcement, the streets around the park would be much safer.”

In addition to increased safety, other improvements to the park are in the works.

“The master plan also includes a soccer field, picnic shelter, a water park, and now the task is to get the funding,” Lereude explained.

Ruiz, Martinez and even the young Diego Cuevas, 10, said what they wanted was a water park.

“I think the park needs a better stuff, like a water park,” Cuevas said.

Cuevas was one of many school children attending Fairview Elementary School, which is adjacent to the park. On the day of the opening, the children were led to a fence separating the park from the school to watch the ribbon-cutting ceremony. When the scissors snapped shut and the ribbon fell, the children applauded in celebration of their newly improved park.

“Right now, my favorite park is starting to be Fairview [Rexland Acres], because of the sidewalk,” Cuevas said.

If Cuevas speaks for the mood of the rest of the children, then the renovations, while modest, have been a huge success.