For Some Campesinos, Winter Is Farming Season 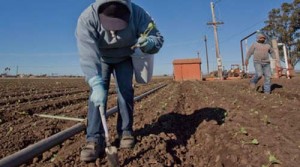 By December in Santa Maria and the Santa Ynez Valley, on California’s central coast, the work season is coming to an end for most farm workers. Many campesino families, who travel north to Oregon and Washington for the strawberry and fruit harvests during the summer and fall, have returned. Hopefully they’ve saved enough money to last through the winter until work here starts again in the spring.

Strawberry workers walk out of the rows at the end of the season.

A lucky few manage to get work during the winter. The last strawberries are still being picked, although there’s not much fruit in the rows any longer. Pruning in the grapevines doesn’t begin until January.

Some crops in the valley last through the winter, though. This is planting season for broccoli, a beautiful and delicious flower originally brought to North America by Italian immigrants.

On the machine, a worker has a tray of seedlings in front of her.

Like many crops, its cultivation has become very systematized. On most modern farms, no longer does anyone scatter seeds on the damp earth. Instead, the first broccoli seedlings are grown in nurseries. Then, when the plants are a few inches tall, they’re put into plastic flats and loaded onto trucks for the journey to the field.

Workers on the broccoli planting machine.

There workers sit on a mechanical planter, pulled through the field by a tractor. As it moves, they drop seedlings into plastic tubes, which then guide the young plants into the mechanism that inserts them into the dirt. Behind the planter come other workers, who catch the places the mechanical harvester misses.

A worker drops seedlings into plastic tubes on the machine.

Still, on some ranches, the old system prevails. There seeds are planted along the rows, and when they sprout, they need to be thinned so that each plant has room to grow. Workers work their way down the rows, chopping away the excess plants.

A woman plants broccoli on the machine.

And on some ranches, the tool passed out by ranch foremen to do this chopping is an old enemy of farm workers — the short handled hoe, or “el cortito”. Workers using a regular hoe can work standing up. But a short handled hoe makes them bend over almost double. Foremen believe that this makes workers space the plants more accurately, and makes them work faster.

Behind the machine, a woman stoops to plant a seedling in a spot missed by the machine.

Even a day at such labor produces a lot of pain, and years spent using this illegal tool can lead to degenerated disks and other spinal injuries. In 1972, Mo Jourdane, a lawyer for California Rural Legal Assistance, filed a demand with the state’s Division of Industrial Safety, to stop California growers from using this tool. In 1975, under pressure from the United Farm Workers, Governor Jerry Brown, then in his first term, forced state regulators to implement a ban.

Yet some growers still haven’t heard the news. Perhaps they believe there’s no longer a movement to enforce the ban. And in fact, conditions for California farm workers may have improved in some ways in the last three decades, but in others they have fallen backwards.

An irrigator attaches a sprinkler head onto a pipe in a broccoli field.

Finally, the planters and thinners leave the fields. Then irrigators come last. They lay out and connect the pipes to the well pumps, bringing water into the field, and screw on the sprinkler heads. As they open the valves, dry sandy dirt turns dark brown under the spray, and the troughs between the rows fill with water and mud. Even in the winter in a coastal valley, California is still a semi-desert. Joseph DiGeorgio, the king of California agribusiness and its largest grower for decades, said the state’s produce was made up of water, labor, more labor, and freight to bring it to market. With no irrigation, and with no workers, there would certainly be no broccoli.

An irrigator starts the sprayers in a recently planted field.