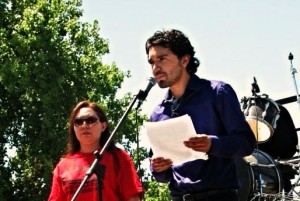 Bakersfield, Calif. – Daniel Jimenez, a 22-year-old Cal State Bakersfield student, has been depending on medicine that his aunt brings from Mexico. But he no longer needs to because he’s now a DACA recipient (Deferred Action for Childhood Arrivals) and meets all the guidelines for the expanded, state-funded low-income health insurance program, which launched on January 1.

The health insurance program, known in the rest of the nation as Medicaid, will now be available to a number of recently documented young immigrants in California, thanks to President Obama. In 2012, the Obama Administration granted youth brought to the US as minors two years of temporary legal status. This new “DACA status” can be renewed after two years.

As a DACA recipient, Jimenez will not qualify for the regular Medi-Cal program, which is funded by both the federal government and the state government. However, following the signing of the federal Welfare Reform Act in 1996 that barred immigrants from some federally funded programs, California lawmakers set up a state-funded Medi-Cal program so low-income legal residents awaiting citizenship can receive free health insurance coverage until they become citizens. With DACA granting temporary status to youth, state-funded Medi-Cal is now available to them, if they meet other Medi-Cal requirements.

“It’s ‘a godsend’ for those DACA recipients who have separated from their families income-wise, and they are not tied to their families financially,” says Dr. Jim Young, former chancellor of Bakersfield College, who mentors DACA students from his home office in Arvin, Calif. where so far he has signed up nearly 80 students.

As of January 1, childless adults who were previously ineligible for Medi-Cal could enroll in the low-income health insurance program if they meet other eligibility requirements.

Medi-Cal expansion is especially welcome to DACA recipient Daisy Meza, who suffers from acid reflux disorder. The 26-year-old Cal State Bakersfield student currently relies on her uncle’s medication that he uses to treat his own acid reflux; she cannot afford pills of her own because one bottle would put her back $300.

“Last month, my stomach was hurting badly. Whenever this happens, the only way to lessen the pain is by throwing up. I don’t like doing this because afterwards my throat starts hurting for days. It feels like I have flu-like symptoms,” said Meza.

A doctor at the CSUB Health Center recommended a procedure that could help remedy her disorder after she noticed her acid reflux was getting worse. The cost was prohibitive.

“The price for an endoscopy is almost $2,000 at Kern Medical Center. A private doctor would charge around $700,” said Meza, who is currently unemployed. “I thought, what’s the point in going to the doctor? They won’t be able to help me.”

But not every DACA recipient qualifies for the newly expanded state-funded Medi-Cal.

DACA recipients, like all people applying for Medi-Cal, must earn under 138% of the Federal Poverty Level, or less than $15,856 for an individual, points out Amanda Lasprogato, an Attorney who works with Kern Health Consumer Center.

“It is unfortunate for those DACA students, who don’t meet the guidelines and will not qualify for the state-funded Medi-Cal, but at least it is a step closer. We must continue to look for a way to open more doors for ourselves,” says Jimenez, who said he plans to enroll very soon.

Edith Cabrera, 28, is a DACA recipient who works full time at $10-per-hour. She said she had been unaware of the state-funded Medi-Cal expansion being available to people like her, But, Cabrera is expecting to be disqualified because her overtime pay might put her above the income threshold.

“I feel a little upset by the fact that on top of all expenses I might have to pay for medical visits myself,” says Cabrera. “I don’t qualify for health insurance at my job because they only offer it to salary employees, and I am hourly.”

Cabrera once medicated herself without a doctor’s prescription when she had severe pain in the bottom of her ribcage.

“The pain did not go away, and I ended up hospitalized,” says Cabrera.

The cause of her discomfort was her gallbladder. Cabrera says that luckily, the hospital she went to had a program for individuals without insurance. That program allowed doctors to remove her gallbladder without any charge.

Her income notwithstanding, Cabrera says she will apply for Medi-Cal.

“It’s better to say that I tried and fought the battle,” said Cabrera. “The worst that could happen is that I get denied.”