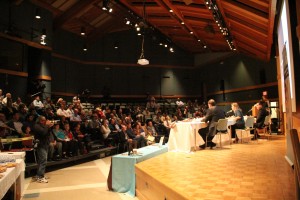 BAKERSFIELD, Calif. — While Kern County is known for being a top producer of agricultural goods in the state, that reputation could one day be surpassed by the mass production of another valuable commodity: energy.

Whether or not that happens will hinge in part on what position the region’s elected officials take on fracking, or hydraulic fracturing, a technique for extracting oil or gas under the earth that uses injections of water and chemicals under a high pressure to penetrate bedrock. Kern County sits atop the Monterey Shale Deposit, the largest known shale oil deposit known to exist, which the U.S. Energy Information Administration (EIA) estimated in 2011 contains half of all the recoverable oil within U.S. borders.

Last week in Bakersfield, candidates in the race for the 21st Congressional District met at an open forum hosted by the Hispanic Chamber of Commerce and moderated by Former Assemblywoman Nicole Parra. Incumbent David Valadao, a Republican, and Democratic challengers Amanda Renteria and John Hernandez attended the forum, where they were each asked where they stand on the issue of regulating fracking on public lands.

Hernandez stood alone in staunch opposition to the expansion of fracking onto public lands.

“I have serious concerns about fracking, serious concerns,” said Hernandez. “When you consider what’s been happening in places around the country where it’s been done, there have been over 220 earthquakes reported as a result of fracking, and the water pumped into wells becomes polluted.”

Hernandez said that the risk of water contamination from fracking is too much to risk for Kern.

“We have enough bad water as it is, and folks in Lamont, Arvin, Shafter, already have problems with water and fracking that is currently going on,” continued Hernandez.

Renteria offered a more positive opinion on fracking, noting the potential benefits of the practice, but also cautioned that it should be done safely and conservatively in order to avoid water contamination.

“Here’s our reality: we need jobs and we need energy independence, and fracking is one of the ways that [we] can create jobs and grow the industry,” said Renteria. “But we have to do it with the right balance.”

Renteria added that state government and fracking industry leaders were beginning to meet to come to some agreements on regulations for 2015.

“The regulations are a good start but we have to make sure we can keep growing food for the future,” countered Hernandez.

“Fracking has been done here in Kern County without issues for over sixty years,” said Valadao. “I’ve had the Secretary of Energy under Obama assure me that yes, enough studies have been done on the safety of fracking, and if we can do it safety, we should take the opportunity to grow jobs and acquire energy.”

Each question looped back to jobs and how to improve the economy of a congressional district with the highest unemployment rates in the nation.

“What we did in central California [seven years ago] is we focused on a regional job fair, working very closely with the Department of Social Services of Fresno County and the Economic Development in Fresno, to educate small business owners on how to grow their business, how to develop their models,” said Hernandez. “That job fair, seven years later, is now the largest job fair in central California, with over 200 exhibitors and employers with 2,500 job openings.”

Hernandez, who himself worked with and through the Hispanic Chamber of Commerce, touted his experience in small business development to help grow the district’s economy, but emphasized production and infrastructure, particularly water infrastructure, to improve the economy.

Valadao, as a sitting congressman, was able to refer to bills he had worked on as well as deflecting comments referring to Congressional Republicans’ recalcitrance and obstructionism.

“I still remember the day, sitting there on the floor, when Collin Peterson, a Democrat from Minnesota on the ag[riculture] committee, referred to me as the only member of the house who understood the dairy policy,” said Valadao. “I’m very proud that his year has been spent with senators, like Senator Feinstein, to work on bipartisan bills to help our farmers here in my district.

Though not officially a debate, as candidates were not allowed to directly address each other, there were times when candidates snuck in underhanded barbs at each other, such as when Renteria referred to “partisan press conferences” by congressional Republicans referring to Valadao, a remark he just as discretely rebutted in his comment.

With a special election coming up on June 3rd to decide between Renteria and Hernandez on the Democratic side, forums like this will surely become more contentious as the stakes become clear. For now, the three are set to appear at more forums throughout the 21st district until the primary election on June 3rd, then the top two primary candidates move on to the general election on November 2nd.