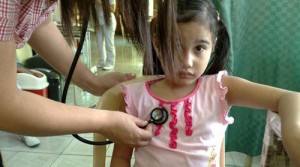 Contrary to the drumbeat of criticism leveled against undocumented Americans that they are a drain on the economy for overusing hospital emergency rooms, a new study released this week found that their rate of emergency room utilization is half that of U.S. citizens.

“Most people who go to the emergency room have insurance and are not worried about providing documents,” noted the study’s lead author, Nadereh Pourat, director of research at the UCLA Center for Health Policy Research. “The undocumented who end up in the emergency room have often delayed getting any care until they are critically sick.”

Researchers also found that undocumented immigrants’ average number of doctor visits was lower: 2.3 for children and 1.7 for adults, compared with 2.8 visits for U.S.-born children and 3.2 for adults.

The study analyzed data gathered in the state in 2009 and 2010 by the California Health Interview Survey (CHIS). It was done in multiple languages and in a “culturally competent” manner, Pourat said. More recent data from CHIS indicates that not much has changed in the characteristics of the state’s population, she said.

The release of the study comes at a time when California lawmakers are debating whether they should extend health care access to an estimated 1 million of the state’s undocumented residents who have no insurance. The 2010 Affordable Care Act disqualifies them from any of the federal law’s benefits.