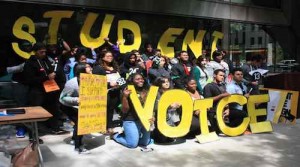 SACRAMENTO – About 50 student leaders from around California gathered for a hearing at the State Board of Education Thursday to press for greater participation in the state’s new school funding law, known as the Local Control Funding Formula.

The event also marked the launch of a statewide campaign aimed at ensuring students have a seat at the table as districts begin to roll out spending plans in accordance with LCFF.

“As a low-income student, I know what our schools need,” Christopher Valencia told board members in front of a packed house. An undocumented student at Coachella Valley High School, Valencia spoke about his time working in the fields to pay for school supplies, adding that low-income students like him  “will be most impacted by the new law.”

Thursday’s hearing gave board members a chance to gauge the rollout of LCFF across the state. The law, which promises more money to high-need students – defined as low-income, English Learners and foster youth – also requires districts to engage parents before finalizing their Local Control Accountability Plans (LCAP), which lay out spending priorities over three years.

July is the deadline for districts to submit their LCAPs to the state board for approval. It is also when the board is expected to finalize its language for the new funding law, which currently says that students should be “consulted” only. Student advocates are hopeful the board will rewrite that portion giving students a more formal role in the process.

Californians for Justice, a non-profit organization that works to foster greater participation among low-income students and students of color across the state in the education system, spearheaded the “My Future, My Voice” campaign. In a press release issued before the hearing, the group noted the campaign is the result of “unanswered student demands over the past year to have a voice” under LCFF.

Among the campaign’s demands are: that the State Board of Education create a formal process for student input, that it give school districts a menu of options to engage students, and that it update the LCAP requirements to ensure districts demonstrate engagement with high-need students.

Students at the hearing sat with placards bearing numbers that they held in front of their faces. The demonstration was meant to highlight the fact that low-income students are often seen as statistics only and that beyond the numbers they remain invisible.

“Our voices have gone unheard, and our faces unseen,” Citlali Hernandez, a student from Long Beach Unified School District, told board members. She was one of two students invited to join the LCAP process in her district, but says her concerns around improving school climate – one of the eight priority areas highlighted under LCFF – were largely ignored.

Jesse Aguilar teaches art at East Bakersfield High School and is a member of the California Teachers Association. He was among those who testified at the hearing in support of the campaign.

“You can’t just talk about student voices,” he said during a press conference following the hearing, where he reiterated the need for districts to set up formal mechanisms to incorporate student voices. “You have to make it intentional.”

Aurora Lopez, student engagement liaison for Oakland Unified School District, highlighted the work her district has done around incorporating student input. Describing it as a “template for the state,” she said students had participated in a recent election for superintendent.

As for Valencia, he said if he were given a role in the LCAP process at his school, which serves a large number of low-income and English-learner students, he would press for more AP courses, more career centers and more help in preparing students for college.

“They’re [the district] focused mainly on graduating students from high school, but not on getting them into college,” said Valencia, who arrived in Coachella with his family from Mexico when he was in fifth grade. “We need more help with the college application process, more exposure to scholarships and other opportunities.”

Valencia said there was a sense that many of his peers are seen by faculty as being bound only for community college, at best, and that most are “not deserving” of advancing into the upper-tier colleges.

“A lot of students are being forgotten about,” he said.