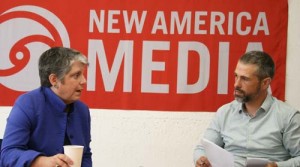 Editor’s Note: University of California President Janet Napolitano recently returned from a two-day trip to Mexico, where she met with government officials and academics to discuss the recently announced UC-Mexico Initiative, which aims to bolster cross-border academic and cultural ties. The initiative comes on the heels of an agreement between President Obama and Mexican President Enrique Peña-Nieto to increase student exchanges between the two countries. Napolitano spoke with NAM education editor Peter Schurmann about the initiative and about the recent shootings at UC Santa Barbara.

What was your initial reaction to the shooting in Santa Barbara?

I was just horrified. In fact I had literally just gotten back from Mexico City, and like most people I was looking forward to a nice, calm three-day weekend. But then you have to go into, ‘What do we need to do?’ We need to make sure the campus has an emergency operation center up and running. The [UCSB] chancellor was in Boston visiting his grandchildren [so] we needed to get him back to the campus; working with the sheriff’s office to get the identities of the victims so that we could then reach out to the families; making sure those who are in the hospital are getting good care. All those things have to happen simultaneously.

At the same time, [we were] thinking about support services the campus might want to offer students, staff and faculty in terms of counseling. A couple of our campuses were already done with school, so they were able to make resources available immediately. The [UCSB] campus decided it wanted to have a memorial. They did that on Tuesday, and cancelled class. It was a remarkable event – 20,000 young people crammed into a football stadium totally silent. It was just very powerful.

What will you carry from this experience?

Sadly, what I carry is that I’ve been to too many of these, and through too many of these. As the governor, as the Homeland Security secretary … these mass casualty events, I’ve just seen and been through many by this point in my career. And in a sad way, that was very helpful because many at the campus had never been through anything like this.

What steps can or should the university take to deter similar incidents in the future?

One of the things we can do, and this is long term but the work is going on and will go on, is more research into the causes of and treatments for mental illness. This ties into the president’s Brain Mapping Initiative and into a lot of the work at our research facilities. As we talk about national health care and implementation of the Affordable Care Act, we need to be thinking about mental, in addition to physical health. We see mental health in the criminal justice side of things, and in all kinds of social problems. I think we are a long way from having our arms around what is going on.

As former head of Homeland Security, your job was to secure America’s borders. Now, as head of UC, you’ve adopted a globalist’s approach to leadership there. Is there any inherent tension between these two positions?

I don’t think so. Part of my job as secretary involved enforcement of the law as the law currently is, even though I was advocating, at the same time, that the law and the whole system needed to change. But that’s not my job here at the university. My job here is, as I like to say, teach for California and research for the world. What that means is to really think of ourselves as the globe’s leading public research university, what are the opportunities for us and what responsibilities do we have.

What was the reason for your trip to Mexico and the initiative you are spearheading there?

The genesis of the trip came out of my visits to the UC campuses during the fall. I kept asking, ‘Well, what are we doing with Mexico?’ at each campus. There were little pockets and episodic things, but no strategic approach by the entire university toward our neighbor to the south. When you look at the world’s fastest growing economies, Mexico is right up there. And there’s been so much focus toward the Pacific and Asia, which is great and we do a lot of that, but it seems to me that we ought to also look south.

Then, in part because I know many of the people in the Peña-Nieto administration from my time as the governor of Arizona and as the secretary, it’s an ideal time to use some of these friendships. Peña-Nieto and President Obama have a joint project to exchange 100,000 students. What role can the UC play in that, and what are we doing in terms of faculty research and joint opportunities?

The UC-Mexico Initiative is designed to put a strategic umbrella over our current activities, but also identify new ones – graduate student exchange, undergraduate exchange and research opportunities. For example, sustainable energy – what work do we have going on in our campuses in that field? Lots. How can we connect with work being done in Mexico? How about work on climate change, or agriculture and security of the food supply?

Data from Google shows 91 percent of employees are white or Asian, and only 3 percent are Latino and African American. Can the UC-Mexico Initiative help balance the numbers in this critical industry?

I would hope so, alongside our own education mission. The second largest cohort of our entering class is Hispanic. They surpass whites. That’s the first time in California history that that’s happened. As we educate these young people, they’re going to be entering the workforce, and these companies are all headquartered in California.

Violence has been cited as a reason for the low number of American exchange students studying in Mexico. What’s your sense of the situation there now?

Of course we will not send students to some place that is dangerous. In Mexico, there are some areas to be careful about. But at the major universities and places where we send students, these are very safe environments in which to study and to learn. Mexico City is like any major metropolitan area in the world, and it’s very cosmopolitan. I think there is a misperception by students and parents about violence in Mexico.

What do you see as being a potential draw for students from the U.S. to go study in Mexico?

First of all, [Mexico City’s] UNAM is a major research university. It is a university that we are going to be forming a specific partnership with. The student body of UNAM is almost the size of the entire UC system. It’s a huge university. The students we have there now are doing sociology and related fieldwork. I would like to see us do more in science, engineering and technology. I think UNAM and UC can match up very well in terms of these undergraduate experiences.

Mexico is behind countries like Korea, China, India and Vietnam in the number of exchange students it sends to the U.S. What’s your response to that?

I think this is why President Peña-Nieto has announced the FOBESII (Bilateral Forum on Higher Education, Innovation and Research) Initiative, to get more students to come to the United States. My impression is the government will be putting some financial support into that for students. But there’s also the perception issue. U.S. students are deterred by the perception that all of Mexico is violent. Mexican students are deterred because of the view that the United States is hostile. Perceptions are difficult to change, but one of the ways you change them is through actual experience. That’s one of the reasons why it’s important to increase the relationship with higher education in Mexico.

Does the potential for immigration reform factor into the long-term success of the Mexico Initiative?

There will be a window between June and the Labor Day recess for the House to take up immigration. I read an article yesterday about how a number of pro-immigration reform advocacy groups are asking the Obama administration not to do anything in terms of changing enforcement policy right now, to take a pause to see whether the House will do anything. I hope they do, and I hope it is meaningful reform. It is something the country needs so badly. Again, a lot of the political reluctance for reform is because of misperception. But the UC-Mexico Initiative is independent of immigration reform.

A good deal of your personal and professional life has been involved with the U.S.-Mexico border.

The border is part of who I am. I’ve driven it, I’ve walked it, I’ve ridden horseback along it, I’ve flown it in helicopters, I’ve been to virtually every port of entry, and I’ve also spent a fair amount of time in Mexico. There is such a rich opportunity here for meaningful exchange, and it saddens me that the toxicity of the immigration issue has infected so many people with respect to our relationship with Mexico. I would like to do what I can to dissipate that toxicity.

What role does Mexico play in California’s future?

California will be stronger and thrive even more in this century if it develops a stronger relationship with Mexico. And I mean that both from an education standpoint, from an economic and trade standpoint, and also from a regional standpoint in terms of facing the world as a region as we deal with some of the global issues that we have. We talked about energy and climate change – two perfect examples of how, if we deal with these together, we will do better than if we deal with them separately.