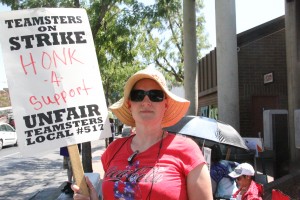 BAKERSFIELD, Calif. — Drivers and mechanics for Golden Empire Transit (GET), who have been on strike since July 15, continue to picket downtown and at GET’s northeast offices. In their demands, union members emphasize their need for living wages and the equal treatment of part-time drivers.

“We’re just trying to keep our heads above water, and right now the water is above our heads,” said Darlene Williams, spokeswoman for Teamsters Local Union No. 517, the union representing the transit employees during negotiations. “Our families are in need, we’re trying to cover our basic needs: food, gas, utilities, housing.”

Picketers at the downtown transit station stressed that contrary to popular belief, strikers and their families are far from prosperous and are not making excessive demands.

“A lot of us, even some full-timers, are living paycheck to paycheck trying to get by,” said Williams. “The adjustment to our wages would give us some relief.”

Another pressing concern for GET employees is how the company handles its part-time drivers.

“We’re not asking for anything unfair or outrageous,” said Kathy Best, a GET employee. “The biggest issue is how unequal it is between full-time employees and flex drivers (part-time drivers).”

Nationwide, an increase in the number of on-call and part-time jobs is fueling a surge in overall employment.  Some in the media have blamed the Affordable Care Act for giving employers an incentive to cut back on full-time positions, in order to avoid paying health care benefits to their workers.

Regardless of GET’s motives, Best, a full-time employee, sees the practice as divisive.

“We want everyone to be treated equally and fairly,” said Best. “[Part-time drivers] do the same work we do, with less benefits.”

Sheila Davis, a part-timer, has experienced this firsthand. “We aren’t guaranteed forty hours (of work), we don’t get the same holidays,” said Davis.

The real problem, however, goes even deeper. According to Davis, GET employees are unable to advance; they stay perpetually part-time employees. Part-time status guarantees neither hours nor advancement opportunities, according to a GET press release.

“We have a really high turnover rate,” said Best. “Morale used to be high, but this and other policies, like headhunting the full-time drivers, it all creates a tense workplace.”

The company is also allegedly combing through the surveillance logs, looking for an excuse to oust a full-time driver, according to Best.

“We work really hard and we do our best, but nobody is perfect, mistakes happen,” said Best. “But now they’ll look through video of your whole shift to look for errors and they’ll focus on full-time drivers, they’re trying to push us out.”

Davis hopes this strike will lead to career advancement for part-time employees over the next few years.

“It’s not right, it’s not fair,” she said. “We work as hard as full-timers, and we want the same chance that they have to put in the time and get rewarded for our work.”

On this the strikers, full-time and part-time alike, seem to be in agreement. “We’re here to be equal across the board,” Davis concluded.

The choice to strike was a difficult one for workers.

“This is not easy for us or our families, we’re putting all of us through a lot of uncertainty,” said Best. “We’re only certain that if we don’t strike, it will only get steadily worse. We have been compromising with GET for years. Last year we almost went on strike but we kept from striking because we didn’t want to do this then or now, but we have no choice.”

Earl Parsons, 26, is one of those affected.

“I have to get a ride to work in the mornings and walk home from 18th street in 100 degree heat,” said Parsons. “I’m lucky to be young and healthy enough to walk home from work but if I wasn’t, this strike would put me out of a job.”

Parsons empathizes with strikers, but as a commuter, his support is ambivalent.

“I understand the workers are being treated unfairly by the company, but it’s hard to feel bad for them when I’m walking 15 blocks in the sweltering heat,” said Parsons.

Williams was apologetic for the effect the strike will have on customers like Parsons.

“We thank our passengers for their support and their patience during the strike and we’re sorry for the inconvenience you’ve had since we’ve started this strike,” said Williams. “We want this to end because we all want to go back to work and serve our customers.”

Following a Thursday morning meeting between GET District officials and the union scheduled by Supervisor Leticia Perez, the Teamsters Union announced that they have a proposal, which GET officials rejected on Wednesday, June 23rd. The union rejected GET’s counter-proposal, prolonging the strike for the near future.

Customers who have a subscription service for rides will continue to receive their rides.

“GET is limiting GET-A-Lift service to people with serious medical needs,” reads a message on GET’s website. “Individuals who meet the trip criteria but do not have subscription service will need to contact GET-A-Lift to reserve rides as needed.”