No Guidelines from State About DACA Medi-Cal Eligibility 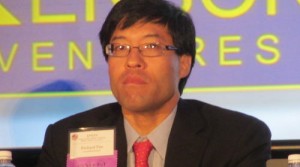 Above: Dr. Richard Pan at a voter education forum on the Affordable Care Act in Sacramento last year.

SACRAMENTO – The California Department of Health Care Services’ (DHCS) failure to issue guidelines to county agencies on the state’s health care program for low-income people has resulted in hundreds of young immigrants being erroneously turned away, says a state lawmaker.

“These counties haven’t been given guidelines” causing DACA (Deferred Action for Childhood Arrivals) recipients to be turned away for Medi-Cal (California’s name for the health care program known as Medicaid in the rest of the country), asserted Dr. Richard Pan at a press briefing organized by his office here last week. Pan chairs the assembly health committee. “They are being denied the opportunity to see a doctor, the opportunity to get their medication, being denied access to treatment.”

Responding to entreaties from immigrant rights activists, in June 2012 President Obama, through an administrative initiative, announced the DACA program. Under it, eligible immigrants between 15 and 31 years of age qualify for a 2-year reprieve from deportation. Applicants must be able to prove they arrived in the United States before they turned 16, have no criminal history and have lived here continually since 2007 while working or attending school to qualify. The amnesty has been extended by another two years.

Nationwide, more than half a million young immigrants applied for the program, with most of them qualifying. In California, 125,000 immigrant youth have been given DACA status.

Since last year, New America Media has been reporting on how county health offices remained unaware that DACA recipients qualified for state-funded Medi-Cal, and how as a result scores of DACA recipients were routinely being turned away.

“We were disappointed to hear that DACA youth who go to enroll are being turned away,” noted Cary Sander, director of Policy Analysis with the statewide health care advocacy group, California Pan-Ethnic Health Network (C-PEHN), at the briefing.

To make matters worse, CalHEERS – the state’s new web-based computer system that determines eligibility and facilitates enrollment for the marketplace Exchange health plans and for Medi-Cal – “has not been programmed” to read DACA applications, pointed out Cathy Senderling-McDonald, deputy executive director with the County Welfare Directors Association of California.

“There’s already the fear of revealing your immigration status,” pointed out Isela Martinez, a trained enrollment counselor in Sacramento. “Added to that, they now have to deal with the exasperation of having your application rejected.”

Clarissa Munguya, 21, testified at the briefing that her Medi-Cal application was initially rejected by a social worker at the San Joaquin County Health Department. She wanted to enroll, she said, because she knew how important it was to have coverage.

Ben Hudson, executive director of the Sacramento based Gender Health Center, lamented that “the millions of dollars” spent by health foundations to increase enrollment in health care was “not money well spent.”

“We now have to double spend to get those DACA individuals back into the system,” he said.

DCHS spokesman Norman Williams said via e-mail that on July 15, his agency sent out draft guidelines to counties, telling them to “address these children as individuals who are in deferred action status” and to recognize their eligibility for full-scope Medi-Cal.

Asked how long it would take to process DACA applications given that there was a reported backlog of 900,000 in the overall Medi-Cal application pool, Williams said that “recent improvements” in the enrollment system has cut the backlog to 600,000, and that is expected to further drop to 350,000 in about five weeks’ time.

In the meantime, he said, those DACA recipients who have filed for Medi-Cal who have “immediate medical needs” can get assistance from their country social service offices. Additionally, they can get a temporary Medi-Cal emergency card, he said.