Surviving ‘La Bestia’ – A High School Freshman Recalls His Journey to the U.S. 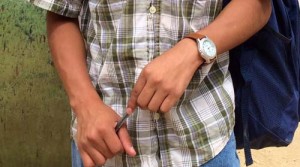 Editor’s Note: José, a 14-year-old Guatemalan American high school freshman in Kern County, Calif., describes the journey he took to come to the United States when he was eight years old.

“I got a very ugly feeling,” said José, who asked that his last name not be used. “It brought me a lot of sadness.”

The baby boy died on the notorious train known as La Bestia (The Beast), a train that Central American migrants use to cross the border into Mexico that has earned its terrifying name due to the sheer number of people who die from falling off of it.

José had been on La Bestia traveling from Guatemala to Mexico for almost three days. For passengers clinging to the train in crowded conditions, this meant three days without rest.

“Because of the lack of sleep, a woman carrying a child fell asleep. Then I heard a noise. It was the boy that had fallen from the train. Nobody could do anything. The mother of the boy started crying and wanted to jump off the train but the people around her held her and stopped her from doing so. When we arrived to Tamaulipas I never saw the woman again,” said José. “I decided to do what everyone does and forget what had happened.”

José, now 14, was eight years old at the time he fled his home country of Guatemala to come to the United States.

The children come alone, he said, because they are fleeing violence or because they believe they can get documentation as a legal U.S. resident. But observers point out that the influx of unaccompanied minors is not related to Obama’s Deferred Action for Childhood Arrivals, or DACA program. The children don’t qualify for DACA, and the surge in unaccompanied minors started in 2011 – before DACA was even announced.

To this day, José says he prays that these children reach the border safely and improve their circumstances.

Before José found himself fleeing his hometown of Quetzaltenango, Guatemala, he struggled to make ends meet. Growing up without the support of his father, José said money was scarce.

“I had to work harvesting coffee beans so I could afford my books for school,” said José.
“Then, there is also violence [and] gangs.”

José said was often harassed by gang members after school who wanted him to join the gang.

“They told me that if I were to ignore them, they were going to go to my house and hurt my family,” said José. “They would offer me drugs and wanted me go rob with them…I felt that I had to do it, and I almost did it so they wouldn’t hurt my family. But my mother stopped me.”

José’s mother decided to migrate to the United States with his older sister, leaving José behind for lack of funds. He lived with his grandmother who helped him raise the money to make the trip himself. Once he had raised a little over $2,000, he began his journey.

“I decided to follow my mother to the United States because our governments in Central America do not have the courage to give us a good education. Also, I came here fleeing the gangs,” said José, who said gang members had threatened to kill him if he didn’t pay them “rent” for the house that he lived in.

But the trek from Guatemala to the United States was no better. José said he and the children he met along the way suffered hunger, thirst, robbery and multiple “humiliations.”

“You see and experience things that no child should ever experience,” said José. “In some cases some adults take advantage of you; they molest you or even rape you.”

The last leg of his trip was the desert bordering Mexico and the United States, a treacherous journey during which many die — in car accidents, by drowning in canals, or, most commonly, from heat-related causes.

“I almost thought I wasn’t going to make it,” said José. “Some people were left behind because they are slowing down the coyote. The coyote has to be at a certain place, at a certain time and can’t wait for the ill or the old. I met a lady who said she was left behind and she survived because another group came and found her.”

José survived the journey and eventually was able to arrive to the United States safely, reunite with his mother and sister, and avoid deportation. They now live in Kern County, Calif., where José attends school. He said he feels very determined to do well in school, go to college, and wants to become a doctor.

“My life has changed a lot. Here, I can dream of going to college. I feel that there are more opportunities. I feel safer. There are no gangs here,” said José. “I also feel good to be able to go high school even though I’m a little nervous because my English is not the best, but God willing I think I’ll be successful.”

Daniel Jimenez is a youth reporter with South Kern Sol, a youth-led news outlet in the Bakersfield area and a project of New America Media