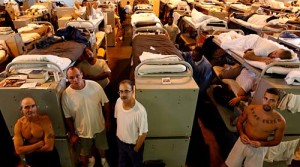 SAN FRANCISCO – A measure on the November ballot would reclassify six non-violent felonies to misdemeanors, a move that observers say could help California finally comply with a federal mandate to reduce its overcrowded prison system.

Under Proposition 47, those who commit certain low-level offenses – check fraud, drug possession, forgery, petty theft, receiving stolen property and shoplifting – would receive lighter sentences as long as they had no serious or violent crimes on their record. The reclassification would apply to property crimes involving amounts less than $950, and it would apply retroactively.

The change is expected to reduce the number of prisoners in state facilities, and state savings would be funneled into mental health and drug abuse treatment, K-12 education, and victims’ services.

Prop. 47 would move California closer to meeting a looming deadline to shrink its prison population under a federal-court mandate, according to a new study by the California Budget Project.

For the last three years, the state has been attempting to address overcrowding in state prisons by shifting nonviolent offenders — and funding — to local county jails, a process known as realignment.

But while the policy has succeeded in reducing the state prison population, it hasn’t been enough.

In 2011, a panel of three federal judges found that California’s severe prison overcrowding was the main reason it was failing to provide prisoners with adequate medical and mental health care, in violation of the U.S. Constitution. It set a prison population benchmark that the state was supposed to have met this year, to reduce the number of inmates in the state’s 33 prisons to 137.5 percent of design capacity. California still has not met the threshold and court judges have extended the deadline by another 17 months.

According to the Budget Project analysis, state prisons housed 115,972 individuals as of August. It still needs to shrink that number by about 2 percent –roughly 2,300 individuals – to comply with the federal-court mandate, and it has to do this by February 2016.

Barry Krisberg, a senior fellow at UC Berkeley, says Prop. 47 will help the state achieve that goal, without having to release violent offenders.

“Frankly, the only way you could bring the prison population [down] even further, you’d have to start releasing more lifers…you’d have to go to the violent population,” said Krisberg, who researches juvenile justice issues at UC Berkeley’s School of Law.

The Legislative Analyst’s Office estimates that Prop. 47 could impact 40,000 people and generate savings in the low hundreds of millions annually.

According to the Budget Project report, the measure, if passed, would reduce prison overcrowding in two ways: Going forward, fewer individuals would be sent to state prison for the reclassified crimes; and those already in state prison for those offenses would be resentenced and sent to county jails.

Some county jails are already experiencing their own overcrowding problems as a result of realignment. But San Francisco District Attorney George Gascon, a sponsor of the measure, says the change wouldn’t worsen conditions in county lock-up. Shorter sentences for individuals convicted of the reclassified crimes, he says, could ease overcrowding in the county jails.

And because misdemeanors carry shorter sentences than felonies, he says, “there will be a reduction in the time that people will spend in custody.”

But not everyone affected by Prop. 47 would be sent to county jails. Instead of jail time, someone who was convicted of a misdemeanor could receive supervised probation or court-ordered drug treatment.

“Prop. 47 will help, not hinder, counties working to reduce any pressures they are experiencing in their jails,” said Lenore Anderson, who directs Californians for Safety and Justice. The group has a 501 c4 Vote Safe that is a sponsor of Prop. 47.

The measure grows out of an idea that began with realignment, explains Rev. Ben McBride of PICO California. The question both are trying to address, he said, is: “How do we get non-violent offenders closer to getting home, building relationships with families?”

“When folks are closer to family…visitation of clergy…they keep more connected [and it helps] the process of rehabilitation,” McBride said. “The further they are from what PICO calls the ‘lifeline to healing’…the worse they will be.”

Similarly, drug courts that mandate drug treatment in the city reduce recidivism by up to 26 percent.

“Most people agree we have a challenge because a lot of crime incidents are connected to drug addiction and mental issues and yet our communities don’t have resources to really address those issues,” said Anderson. “A lot of those problems get much worse in the criminal justice system.”

UC Berkeley’s Krisberg noted that Prop. 47 has very little opposition thus far. Opponents, including the California Police Chiefs and the California Correctional Officers Organization, have raised $8,000 – far less than supporters of the measure, who have raised more than $3 million.

Public support for the measure also appears to be high. A June Field Poll found that 57 percent of Californians support the initiative, with 19 percent undecided.

Anderson says the lack of opposition and strong support for Prop. 47 shows state residents are “increasingly frustrated with spending on prisons.”

“We have the ability to …significantly reduce the prison and crime problem in state with this ballot measure,” she said. “And reinvest [the money] into things that Californians think are more important priorities to keep communities safe.”