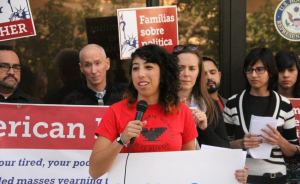 BAKERSFIELD — A day after President Obama announced he would grant deportation relief to over 5 million immigrants on Nov. 21, the Kern County Coalition for Citizenship held a press conference with local organizers to respond to the plan.

“Today is a very special day, many of us standing here and families at home have been waiting for a moment like this for years, to bring relief to families,” said Paola Fernandez, a DACA recepient whose mother of the same name qualified for the recent relief program because of a younger daughter. “Today’s action brings tears and joy and sighs of relief for many families and I’m grateful for the President keeping his promise and the promise of America: to have a shot at a better life.”

The Obama administration announced he would offer three years of deportation relief to up to 5 million immigrants living in the U.S. through an executive action. An estimated 4.1 million of those affected will need to meet the following requirements in order to qualify: prove they’ve been living in the US for five years, have children that are either legal permanent residents or citizens, pass a background check, and pay taxes once accepted into the program. The president also expanded his Deferred Action for Childhood Arrivals (DACA) program to an estimated 300,000 people.

While many of the speakers and organizers proclaimed “sí se pudo” (implying a triumph and subsequent closure of the immigration issue), some of those present were more cautious. Obama’s executive action still falls short of comprehensive immigration reform that would require participation from Congress.

Organizers lamented the fact that parents of DACA immigrants will not be covered by Obama’s plan, and LGBT immigrants, who are likely to not have children who are citizens, are also excluded from relief.

Fernandez said that although the president’s plan is relieving her from deportation, she mourns for those that won’t be eligible for relief.

“When I heard that this would directly help me, I instantly felt relief, like I’ll finally be able to live without fear,” began Fernandez. “But then I realized that this wouldn’t help people I personally know, and I felt saddened by that.”

Fernandez isn’t alone in greeting Obama’s plan with mixed emotions. California Immigrant Youth Justice Alliance, a network of undocumented youth who organized protests in front of ICE throughout the valley and southern California, issued a blistering criticism of the Obama administration’s announcement and immigration policy.

“After deporting over 2 million community members and spending years denying he had the ability to take executive action, President Obama responds to community mobilization: minimally protect a few and target 6 million for detention and deportation,” read the statement. “As we heard, Obama’s executive order fails to address the root causes of immigration,[sic] by further creating divisions… [t]his announcement is no celebrating matter.”

“First, we’ll build on our progress at the border with additional resources for our law enforcement personnel so that they can stem the flow of illegal crossings, and speed the return of those who do cross over,” said President Obama during his speech.

“It’s a step in the right direction in protecting those who have been here longer than five years or with children who are citizens, but there continues to be a strong focus on enforcement and making sure the border is safe, even though there are less crossings,” said Kaicher.

Fernandez says while Obama’s plan wasn’t everything she was hoping for; she still has faith that Congress will make further reforms.

“We’ve been waiting for so long for something that can give us all relief, not just some of us,” said Fernandez. “With hope and faith, it may yet come to pass.”