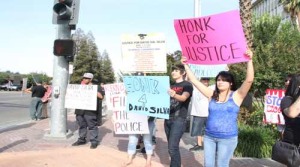 Above: Residents of Bakersfield protested last May on the one-year anniversary of the death of David Silva. The 33 year-old father of four died while being beaten by nine Kern County sheriff’s deputies. (photo: Alfredo Camacho)

Editor’s Note: When President Obama proposed his $263-million spending package to expand the use of body cameras on officers and other efforts to improve community-police relations last Monday, he noted that “simmering distrust” of law enforcement is not unique to Ferguson, but present in communities of color across the nation. Yet on the whole, discussions of police misconduct in mainstream and social media outlets have reduced it to a black and white, and decidedly urban issue – African Americans on one side, white officers on the other. New America Media asked youth reporters in rural, and predominantly Latino, areas of California to survey people in their community about how they perceive local law enforcement.

“I don’t think our local law enforcement is particularly racist, but I don’t think they always deliver justice when we need it. If I had my car stolen, and if I called the police to get it back, I don’t think they would get my car back. Calling law enforcement is someone’s last resort here, not their first option. I can trust the police to a certain point, but I wouldn’t trust them if they pulled me over. One of my friends who is a young Hispanic man … a cop pulled him over [and] told him his back light was out, but when he went home the light was working fine.”

“My relationship with local law enforcement is less than decent. They can be overly aggressive, but mostly they are just disconnected [from] our community. There are some of them that are very pleasant to have around, but that kind of situation isn’t the norm.”

“In my community of Coachella, I believe our relationship with law enforcement is very good. We rely on our law enforcement to protect us, and we trust them to do so. Never once have I been afraid to rely on a police officer for aid.”

“My community’s relationship with the local law enforcement has not been on great terms over the years. I believe my community needs to reestablish the importance of respecting local [law] enforcement. In my experience, my family has needed their help, and we’ve had the police help us as much as possible. Law enforcement’s credibility in my community depends on whether different people in the community believe the police are doing their job.”

“I think that there’s a lot of distrust. Just from what youth share of their experiences in the community, and even adults, like community residents, they are criminalized or stereotyped by the way they look. In the immigrant community here, that distrust is definitely there … in terms of seeing the police department as something that is supposed to protect and serve the community. I know local law enforcement is making an effort to change that, but it’s still the dominant view of them.”

“My community distrusts the police and law enforcement, which has failed to become more diverse and culturally competent and has not pushed hard enough to engage the community. In order to peacefully coexist and bridge this unfortunate gap there must be a mutual level of understanding and efforts on both sides to end tension. Unfortunately, both community and police see each other as threats and continue to alienate each other.”

“Personally, I have never had an issue with the police. I’ve been to a few protests and they kept their distance in a way that indicated trust and respect but also caution in case something occurred. I believe that’s the way relationships between the community and the police should be.”

“Here in Merced I witnessed a guy get beat up and thrown in the back of a police car. He was a homeless man and he’d asked another homeless woman for a cigarette and the woman started screaming as a police officer drove by. The police officer beat the guy for nothing. I heard him ask her for a cigarette in a very calm manner; there was no apparent reason for the woman to freak out and the cop didn’t ask questions, he just attacked the man. I definitely wouldn’t mess with the police around here after seeing that.”

“I haven’t experienced many problems first hand with the police in Merced. They seem like most cops, arrogant, eager to bust people for nothing and generally very rude. A friend of mine was pulled over for not wearing a seatbelt, but then the cop swore he smelled marijuana and ended up searching the entire vehicle only to find there were absolutely no drugs in the car. He just felt like abusing his power because he knew he can get away with it.”

“The cops around here in Merced are cocky. They seem to think that because they are cops, they are better than everyone and can treat people however they want. I am not sure if the police are racist but the recently elected sheriff seems to be, so I’m curious and a little nervous about how things are going to go down in the next couple years.”

“I’ve noticed that Merced police are a mix of both — officers that do their job right, and ones that take advantage of their position.”

“The community fears the police. You see a cop, you do whatever you can to avoid them. A friend at work, Chris Silva, his brother David was killed by 9 officers and they didn’t press charges. If nine of us got together to beat someone up to death, we’d all be rotting in jail right now. But the sheriffs? They’re free to walk around and live their lives. There are so many who are so scared they won’t look the cops in the eye much less stand up to them. I don’t want to say … all cops are bad. I don’t think that. But it’s getting harder and harder.”

“Here locally and across the country in general I do feel that we don’t have such a good relationship with police officers. We all just feel like we can’t trust them because they are out to get us and not to protect us.”

“Here in Kern County I feel that we don’t have the best relationship with our law enforcement, because of some prejudices. But in other places across the country, most people seem to trust their police officers. These issues, like what happened in Ferguson, are just isolated and rare.”