A Model for Police Reform 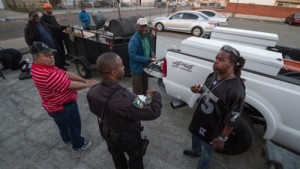 Ed. Note: In the past decade, the police department in Richmond, Calif. has undergone a dramatic transformation. Spearheaded by an openly-gay and white chief in charge of policing this largely African American and Latino city, the changes are now bearing fruit, with crime down and trust between officers and the residents they are meant to protect on the rise. As departments nationwide look for ways to improve community ties in the wake of police killings in Ferguson and New York, Richmond stands as a promising template.

RICHMOND, Calif. – Richmond’s police department is undergoing something of a renaissance these days, thanks in part to decades of reform that have moved the department from its longstanding enforcement-driven model to one that focuses more on building trust with the public.

That transformation was thrust into the spotlight in December when an image of Chris Magnus, Richmond’s white, openly gay police chief, went viral, stirring a national response. In the image, Magnus is seen holding a “#BlackLivesMatter” sign while in full uniform at a demonstration against police brutality. The demonstration followed the acquittal of a white police officer in the killing of Michael Brown in Ferguson, Missouri.

Magnus’ nine-year tenure is marked with like gestures: an extended hand to residents, viewed as enlightened by some and controversial by others.

“But the biggest challenge,” Magnus says, “has been changing the perception black community members [have toward police], those who had experienced a legacy of mistrust.”

That fraught legacy goes back decades, to the rough and tumble 1980s when “the cowboys” – a notorious, roving squad of undercover narcotics agents – were regularly accused of brutality, and more recently to the early part of the 1990s, when the city saw record homicides.

More than two decades, and a handful of police chiefs later, crime still racked Richmond when Magnus came on board. In 2005, a year before Magnus took over, there were 40 homicides.

“When I got here we were dealing with an extraordinarily high murder rate, off the charts,” Magnus says. “Officers were just crisis managers, moving from one hot call to the next.”

Along with the high crime rate, inner-department crisis and dissent greeted the new chief. He took the reins after a series of stagnant interim chiefs, save the progressive, but short-lived tenure of Chief William Lansdowne in the 90s. Other people wanted change in the past, Magnus says, but the culture of distrust and aggressive policing was too divisive.

Early on, seven African-American officers accused him of racial harassment and discrimination in a civil lawsuit. Part of the allegation was that Magnus had blocked the promotions of black officers. The chief argued that he was dissolving the departmental “buddy system” that rewarded officers’ connections and seniority, instead of merit and performance. Magnus was acquitted in 2012.

Richmond Police Capt. Mark Gagan says these early shake-ups and “unflinching discipline” were not merely a show of force. Since he took over, Magnus has demoted and fired more officers than two decades of previous chiefs combined, while increasing the size of the force from 155 to more than 195 officers.

One of Magnus’ first steps was to decentralize the chain of command. Captains and other middle management positions were given more responsibility. For example, if a robbery occurs in the middle of the night, that sector’s captain will hear about it first, then coordinate officers and call community members in the area—often driving to the scene, too. Prior to Magnus, the sector captain might not have found out about the crime until the next afternoon.

Magnus says even if just one officer can break through and form a bond with a neighborhood, it’s a victory for the department.

“Cops are pragmatic,” Magnus notes. “They want to be viewed as partners in the community, not adversaries.” An ever-present fixture at city meetings, neighborhood events and volunteer opportunities—jeans dirty, shovel in hand—the chief has led the movement by example.

That work appears to be paying off. In the past few years, following a crime, or suspicious activity, tips and witnesses come forward more so than ever, Magnus explains. There’s also been a significant drop in overall crime.

Community policing, formerly a specialized tactic taught to a handful of officers, has become the mandated status quo in Richmond. Gagan says Richmond is one a few departments in the Bay Area to implement a “true geographic deployment.” Meaning, officers are assigned permanent beats and can’t choose new ones each year, as was the case in the past.

Beat cops attend neighborhood council meetings in their coverage areas. They get out of their cruisers to walk around and meet people, building two-way rapport. Sometimes they’ll even give out their cellphone numbers.

Sergio Rios, Vice President of the 23rd Street Merchants Association, says prostitution along 23rd street’s busy business corridor dropped significantly when Officer Yesenia Rogers made herself regularly present and available to business owners two years ago. “I can just call her whenever I see something,” he said.

To gain trust in neighborhoods, RPD has also shifted from old-school force to preventative policing. “Verbal de-escalating” has made handcuffs, batons, and guns less and less necessary.

This isn’t just the “technique and tactics” you learn in the police academy, Magnus says. “[My officers] need to learn how to talk to people and be problem solvers.”

Gagan and Magnus say citizen-led, anti-crime organizations, like Ceasefire and the Office of Neighborhood Safety, contribute significantly to the improved situation.

Bennie Lois Singleton, a volunteer with Ceasefire, says years ago she was afraid to even drive down Macdonald Avenue after witnessing shootouts in Nevin Park. Nowadays, she regularly walks the route without trepidation.

“This is all because the community started interacting with police, and vice versa,” says Singleton, a longtime Richmond resident.

“I’ve never been so comfortable with police,” she adds. “It’s like everything else, when you get to know a person, you look at them differently.”

Bobbie Amos, a construction business owner who grew up in Richmond, recently walked into the RPD building on Regatta Boulevard and had a 30-minute sit-down with Magnus and Gagan—resident to badge. “I just wanted to meet them and say that we appreciate what can be a pretty thankless job,” Amos says. “We need to have relationships with the police.”

The chief also introduced new technology to help with accountability. Body cameras, vehicle monitoring, and the “blue team” personal monitoring system have been key in holding officers accountable. These new, real-time strategies help watch commanders maintain everything, save a direct eye on beat officers. Interactions with residents, complaint histories, and even the cruiser speeds are closely monitored and digitally documented.

“Now there are real consequences for bad behavior, bad police,” Magnus says. Consequences can come in the form of special training, missed promotions, demotions and even terminations. More often though, the chief says he chooses positive reinforcement to “get people to do their jobs in a new and better way.”

Along with new technology, the department has implemented new rules for dealing with missteps. In-house investigations, like the one around last year’s officer-involved-shooting, a corruption-related firing, and a marijuana cache found in another officer’s house, are made public.

“We’re transparent and proactive in dealing with bad behavior,” the chief says. “People [in the department] don’t want to stand by and let the one percent break the public trust.”

Though Richmond has come a long way since its days on the FBI’s most dangerous cities list, Magnus knows there’s still work to be done.

“We can’t drag people into a relationship,” he says. “But as long as they’re willing to meet us half way, we’ll be there waiting.”