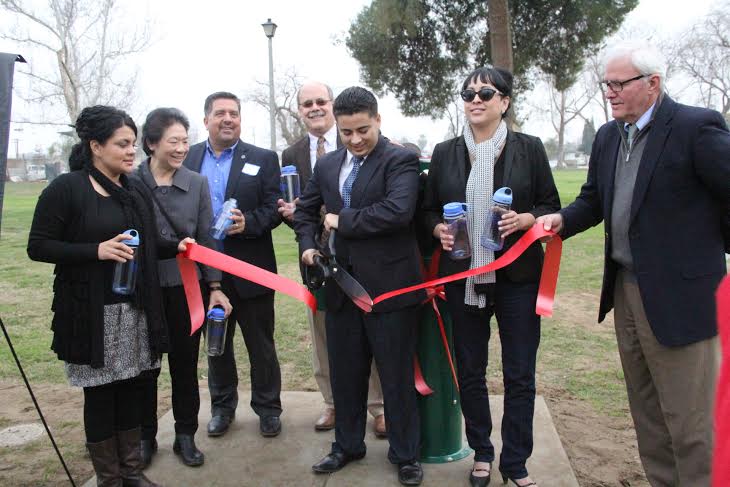 “You may have noticed this water fountain which was installed earlier in the week,” announced Bob Lerude at a press conference marking the launch of the #Agua4All initiative in Lamont Park last week.

Lerude is the director of Kern County’s Parks and Recreation department, one of several partners present at the unveiling of new water dispensers installed at three locations around Lamont.

The initiative, a project of The California Endowment and other groups including the Rural Community Assistance Corporation and the Community Water Center, is opening 120 taps in two pilot locations (South Kern and Coachella Valley) to provide residents with access to clean drinking water. Three dispensers in Lamont and DiGiorgo Parks and two in Rexland Park were the first to be installed.

All dispensers are outfitted with two taps, one to refill containers and another for drinking.

But there are some differences between the dispensers to adapt to the unique needs of each community. For example, “The ones in Arvin have an additional filter,” Lerude said, to “provide safe drinking water free of the higher arsenic levels of Arvin’s water.”

The program required the coordination of city government, community stakeholders, and area non-profits.

Arvin Councilmember José Gurrola said he first learned about the opportunity from Community Water Center, a Tulare-based organization founded on the idea that “clean water is a basic human right, not a privilege.”

“The Community Water Center approached me about a grant they thought the city of Arvin should apply for, a grant for drinking water at the parks, so we got the city manager working with them,” said Gurrola. “We showed up to a meeting with members of the community to tell the Community Service District, ‘It’s free, filtered drinking water, it’s free money, why aren’t we doing it?’”

Susana De Anda, co-founder and co-director of Community Water Center, told South Kern Sol that years of work went into the project behind the scenes.

“#Agua4All started years ago, from the moment people coined the term ‘Arvin water’ to refer to their water,” said De Anda, referring to Gurrola’s Arvin High School chemistry class which tested the water and found it unsafe to drink.

“People have known this and have conformed to the reality of paying a water bill and then paying more for water you can actually drink,” said De Anda.

“We want to bring safe water dispensers to the areas that need it the most,” she said. “It’s the poorest residents who have to pay double for water.”