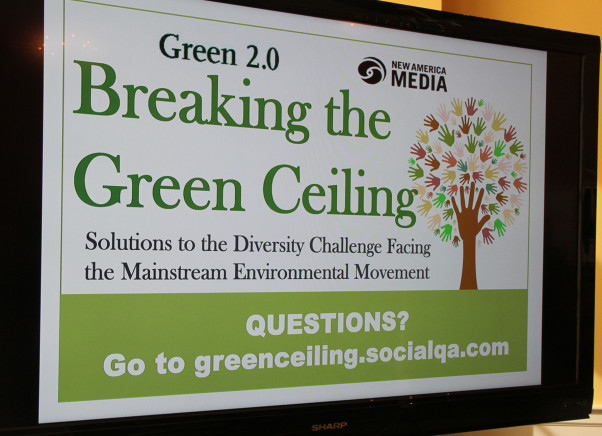 Over 200 environmentalists, philanthropists, and journalists convened last week at the Commonwealth Club in San Francisco at an event hosted by Green 2.0 (an initiative of The Raben Group) and New America Media to discuss an issue that’s become increasing urgent in effectively addressing climate change – the lack of diversity in the mainstream environmental movement.

The overall tone of the conference was largely optimistic and upbeat, expressing belief that the diversity problem can and must be fixed.

“Diversity has been a central tenet in the environmental justice movement since its inception,” said Clifford Rechtschaffen, senior advisor to California governor Jerry Brown. “We’ll never tackle the enormous challenge of climate change without diversity.”

Despite the rapidly changing racial and ethnic composition of the United States, environmental agencies, NGOs, and foundations have remained predominantly white, according to a recent study from University of Michigan professor Dorceta Taylor that was commissioned by Green 2.0.

The study also highlighted a widespread disinterest from organizations in making concrete changes to tackle the diversity issue. While a majority of organizations surveyed expressed support for increasing diversity, a much lower percentage expressed intent to follow through within their own workplaces.

For example, 70 percent of foundations believed training programs for low-income and ethnic minority residents to participate in their causes “should be done.” Only 20 percent said they are “likely or very likely to support” the training programs.

One of the successes so far in increasing diversity in the environmental movement has been the employment of more women, though not women of color, she says.

Many who spoke dismissed the idea that the lack of diversity originates from the notion that people of color care less about the environment or that the environmental movement has historically been a white movement.

In fact, people of color have been statistically more likely to be concerned about climate change, according to philanthropist Tom Steyer and Raben Group president Robert Raben.

“We are a much better society when we act together,” Steyer said. “Climate change is the biggest test of our time, and it cannot be done without a diversity coalition.”

“We can’t remain silent on core democratic and human rights issues,” said Sierra Club executive director Michael Brune. “For us to be effective, we have to look deeply at underlying tensions.”

In the final panel, several leaders from communities of color tied their personal experiences and observations from the tech industry, the philanthropy world, and the environmental field with the issue of needing more diversity.

Among many recommendations, they encouraged executives of environmental organizations to take an active role in implementing a more diverse workplace.

“If diversity initiatives do not come from the top, it’s not going to work,” said Tomas Torres, the San Diego border office director for the U.S. Environmental Protection Agency. “Don’t delegate this to your middle management. Put your resources where your words are.”

Most crucially, environmental leaders were encouraged to submit their organizations’ diversity data to Green 2.0, which is working with GuideStar and the D5 Coalition to collect this data and create greater transparency in the field.

“It’s moments like this that encourage us to not give up,” said Peggy Saika, the president of Asian Americans/Pacific Islanders in Philanthropy. “We live in a society of abundance. We can do better than this.”