Live the Challenge Ends With Most Successful Run Yet 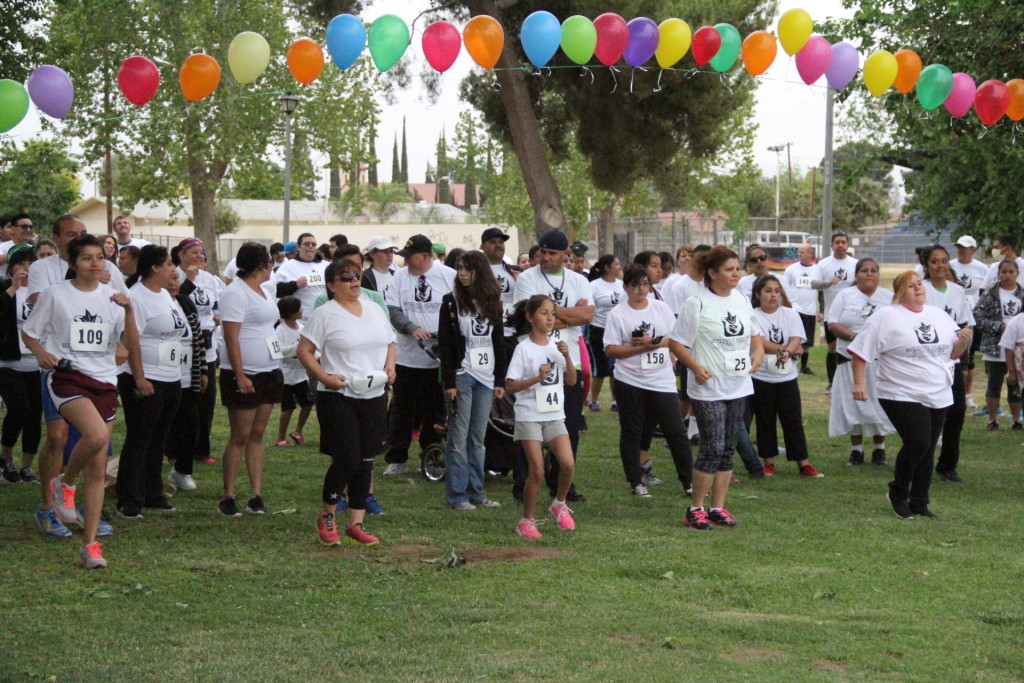 LAMONT, Calif. — Building Healthy Communities South Kern (BHC-SK) celebrated the end of its annual Live the Challenge with its biggest and most successful Live the Challenge event to date. Over 300 runners from the South Kern area gathered at Lamont Park on Saturday, April 25 to participate in the 5k or 10k color runs, a turnout that surprised event organizers.

“Our first year we had about 150 people, last year, with that winter storm, we ended up with about 100 people, but this is more than double,” said Jennifer Wood-Slayton, hub manager for BHC-SK. “We got 500 shirts but we organized for 300 people, and that was a generous estimate, but we’re running out of bags.”

The ongoing success of the event began even 100 days before the run, when BHC began to gather pledges for the 100 Day Challenge. Participants were asked to “choose one change that will improve your and your family’s health and make that change for 100 days,” according to the BHC website.

“The first year we had 500 [pledges], the second year our youth went out and got about 700, year after 300… last year we didn’t have as many, about two hundred something,” continued Wood-Slayton. “For this year, at last count we were at over 1,100.”

Wood-Slayton attributes the success to incentives like goodie bags, plus a strong focus on social media campaigns and facilitating easier online pledge-making. In addition, incorporating the recent fad of hybridizing running events with the Hindi spring festival of Holi to make “color runs” helped build anticipation for the event.  Because of the excitement, BHC had trouble recruiting volunteers for the event as most wanted to run.

“It was Angel’s [Munoz, hub coordinator] idea, she presented [the idea for the color run] to the committee as a possibility and everyone went crazy for it,” said Wood-Slayton. “We even had trouble getting volunteers for it since they all wanted to run, they asked, ‘we’ll volunteer but can we still run?’”

Julissa Vazquez was one participant who signed up to run with her three children and her neighbor.

“My cousin motivated us to do the Color Me Rad Run about two years ago and I started with that one, I liked it, it felt good, so I did the one next year,” said Vazquez. “For this one, I told my kids, ‘we’re going,’ they said, ‘no’, so I said, ‘No, we’re going.’”

Vazquez had not heard of the 100 Day Challenge. After it was explained to her, she expressed her interest in taking it on next year.

“If I had knew about it yeah, I’d get my kids to do it, too,” said Vazquez. “I’m diabetic and I don’t want [my children] to be diabetic, we have to show [our children] to take care of ourselves, because if we don’t, who will?’

Mark Ruiz, 15, is the oldest of Vaquez’ children, and already runs on a regular basis, but the BHC run pushed him towards new fitness goals.

“[The 100 Day Challenge Run] motivated me to run and get better on my mile time,” said Ruiz. “I run during PE, so this wasn’t hard, and I play [soccer] after school so I run there, too.”

Both had goals they would like to do for their 100 Day Challenge.

As more families learn about the Challenge and as South Kern becomes a healthier, more active place to live, Wood-Slayton believes that these long-term changes will effect positive results over time.

“We didn’t become a community that has all these challenges overnight,” said Wood-Slayton. “The 10, 20, 30 years it’s taken to get here but if we can create the support structures that create a healthy community.”