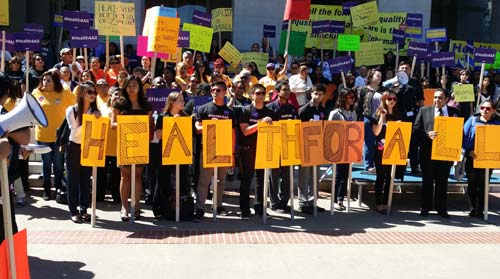 SACRAMENTO – After hearing heart-rending testimonials from three young undocumented immigrants who have seen first hand the havoc caused by not having access to health care, the Senate Health Committee yesterday voted 7-0 to provide health care to all Californians, regardless of their immigration status. The committee also witnessed wide-ranging support from representatives of more than 30 health care, labor, education and immigrant advocacy organizations.

The vote went along party lines, with all seven Democrats on the committee supporting SB 4, the Health for All bill sponsored by Sen. Ricardo Lara, D-Bell Gardens, with the two Republicans on the committee, Senators Janet Nguyen, R-Garden Grove, and Jim Nielsen, R-Gerber, abstaining.

Committee chair Sen. Edward Hernandez, D-West Covina, said before the vote was taken that he was convinced that every immigrant in the United States deserved access to health care. California, he agreed with Lara, should take the leadership role in making this happen.

Like Sen. Lois Wolk, D-Davis, before him, Hernandez said he too would like to be added as a co-author to SB 4.

Lara’s bill would allow low-income immigrant families in California to get regular medical care through the state’s health insurance program for low-income people called Medi-Cal (Medicaid in the rest of the nation). The bill would also allow undocumented immigrants whose incomes are above the Medi-Cal eligibility limit to purchase insurance through Covered California, the state’s online marketplace set up under the 2010 Affordable Care Act (ACA).

Gabriel Aguila, a health worker with Clínica Monseñor Romero in Los Angeles, testified in Spanish that he was diagnosed with diabetes six years ago and more recently with a tumor, and accessing health care has been a challenge. “Please reform our health care system,” he pleaded.

Lara told the committee that people should not die from easily treatable illnesses and accidents simply because they cannot access health care.

Ronald Coleman, government affairs manager with the California Immigrant Policy Center, agreed, telling the committee members, “You have to right this wrong.”

One in 10 Californians is undocumented, yet undocumented immigrants generate millions of dollars for the state economy, noted Lara.

A new 50-state study out this week by the Institute on Taxation and Economic Policy finds that the 3.1 million undocumented immigrants currently living in California collectively paid $3.2 billion in state and local taxes in 2012. This represents a $500 million increase over a similar report two years ago.

“Investing in immigrants is investing in California,” asserted Coleman.

But for the two Republicans on the committee, the question of where the bill’s funding would come from – the same question that stalled in the Senate Appropriations Committee a similar bill proposed by Lara last year – remained uncertain.

Sen. Nguyen acknowledged that “our health care system has many deficiencies,” a significant one being not having enough doctors and dentists in the Medi-Cal network because of the state’s low reimbursement rate. But if the state were to pass Lara’s bill, she wondered whether California would be able to “sustain” it financially. The bill, she said, comes with a price tag of over $1 billion, which she said would have to come out of the state’s general fund.

Lara said he agreed with Nguyen that Medi-Cal doctors needed to be reimbursed adequately. But he pointed out that SB 4, unlike SB 1005, the Health for All bill he sponsored last year, was far less costly. That’s because under SB 4, no financial support from the state would be provided for people buying insurance through the exchange. He pointed out that nearly one-third of California’s undocumented population would be able to afford to buy insurance on the marketplace without the state’s help.

In addition, he said, if the suspension placed by a Texas court on President Obama’s executive action to expand the Deferred Action for Childhood Arrivals (DACA) program and launch the Deferred Action for Parents of Americans (DAPA) program is lifted, an estimated 1.25 million undocumented immigrants in California may be eligible for work authorization and relief from deportation. That would drop by half the number of uninsured immigrants in California, thereby lowering Emergency Medi-Cal spending on them, he said.

The state is already spending about $1.7 billion on its Emergency Medi-Cal population. Under Lara’s bill, it would only be spending an additional 2 cents on every dollar it spends to provide comprehensive Medi-Cal, Coleman said.

SB4 is now headed to the Senate Appropriations Committee. If it is approved there, the full Senate will hear it.

Anthony Wright, executive director of Health Access, the statewide health care consumer advocacy network, said he believed the bill would become law this year. “We have the wind on our backs,” he said.