Family Detention — It’s Time to Do the Right Thing 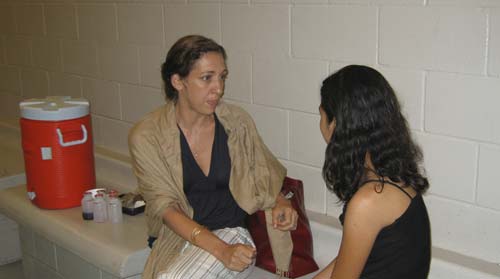 A court ruling is the latest blow to the controversial practice of detaining families seeking asylum. Now it’s up to the Obama administration to do the right thing.

When the number of unaccompanied children fleeing Central America in search of safety overwhelmed U.S. border infrastructure last summer, the Obama administration panicked. Instead of addressing this surge as a refugee situation, the administration focused on “stemming the flow” or trying to prevent arrivals at all costs. Their strategy included detaining mothers and children, with an almost 4,000 percent increase in the use of family detention facilities — reviving a practice that had already been abandoned as traumatizing and unmanageable.

Even after the government’s own statistics confirmed that close to 90 percent of these children and their mothers had legitimate asylum claims, the Department of Homeland Security (DHS) continued to detain them in conditions damaging to children’s health and wellbeing.

Under pressure from Congress, advocates, the media and a possible court order, the Obama administration announced in June 2015 they would consider the release of parents and children who passed their credible fear or reasonable fear interviews on bond or by using alternatives to detention. Releases began but were confusing and chaotic.

And just last week, a federal district court ruled that the administration’s policies regarding family detention, and conditions at the border, are in violation of a settlement reached in the 1997 Flores v. Meese case.

The court affirmed that children crossing the border, whether traveling alone or apprehended with their parents, generally should be released from U.S. custody, preferably to a parent, including a parent with whom they were apprehended.

In the rare case where a child can’t be released, the court said the child must be held in non-secure facilities licensed by child welfare agencies. Neither of the detention facilities in Karnes County or Dilley, Texas, which were built in response to the increase in Central American refugee children last summer, is licensed by the state.

Even short periods of family detention cause harm. That’s why we have long argued that the government should release children with their parents or turn to proven and cost-effective alternatives to detention to mitigate possible flight risk. The administration is likely to appeal the court’s order but it is time for the administration to accept that family detention is not the answer to an increase in asylum seekers, no matter how large.

One option is providing case management to those awaiting their court appearances. This would include education on the legal process for asylum seekers and allow far better access to legal representation.

Not only are alternatives more ethical; they cost between 17 cents and $17 per day compared to the $343 daily cost of detaining each family member. At the very least, all families should be provided with the basic information they need in order to comply – such as clear instructions on what is expected of them, where they should report and how to obtain legal assistance.

The good news is not limited to family detention. The court also found that the border facilities used to detain children did not meet even the basic standard of “safe and secure.” Headlines last year were full of stories of children held in overcrowded facilities that were not equipped to meet their needs. The court ordered DHS to develop enforceable custody standards, something advocates have been urging DHS to do for years. The administration has made some progress on this and must now focus on finalizing and implementing these standards. They are a necessary first step for complying with the law and for upholding basic American values of humane treatment.

And in what can only be described as the triple crown of asylum rights protection, the Government Accountability Office and the Center for Border Patrol in July reached an agreement to improve screening procedures of unaccompanied children from Mexico and Canada arriving in the U.S. Better assessments will gauge whether children are afraid to return to their country, are at risk of trafficking and are competent to decide if they want to return home before seeing a judge, making it less likely that children are returned to danger or exploitation.

This opening for progress is the result of a concerted effort by a number of advocacy organizations. But there is more work to be done. We’re pragmatic people and we know that court orders and first steps are not the same as implementation.

Faced with tens of thousands of traumatized women and children who walked across our border with virtually nothing but the clothes on their backs — asking for protection against some of the worst violence in the world — the Obama administration seemingly forgot decades of policy that embraced those who needed our help. Let’s hope we’ve convinced them otherwise.

Michelle Brané is the director of the Migrant Rights and Justice program at the Women’s Refugee Commission.