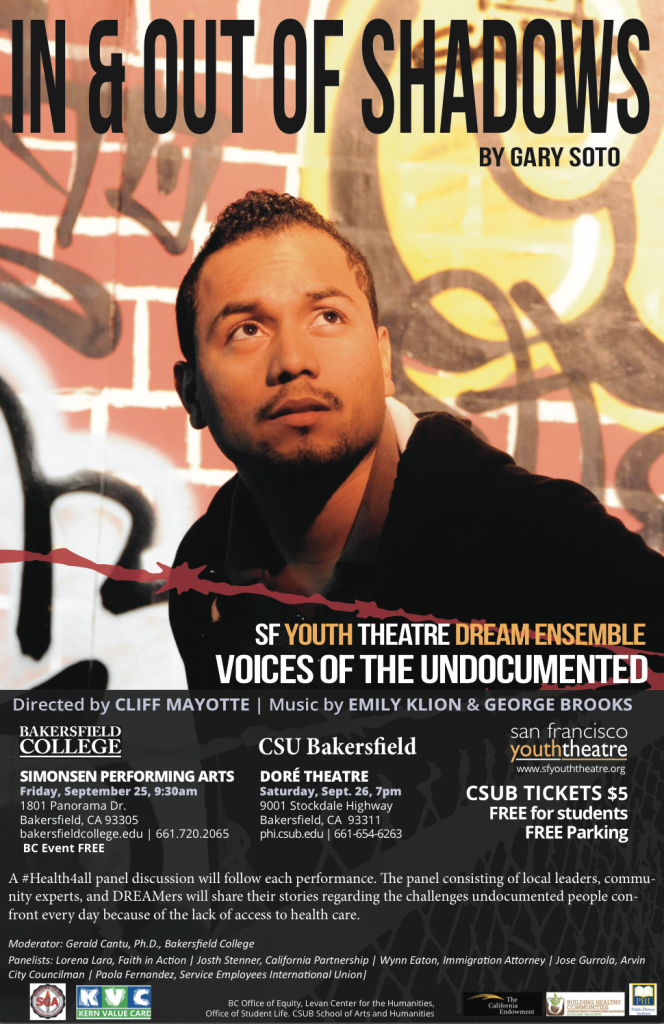 Building Health Communities-South Kern, Bakersfield College and Cal State Bakersfield partnered to bring Gary Soto’s play ‘In and Out of Shadows’ to Kern. The play tells the story of what it’s like to be undocumented in California through the eyes of DREAMers, recipients of the Deferred Action for Childhood Arrivals program. A program that offers temporary legal status to qualifying undocumented immigrants who entered the country at or before age 16, and who have lived in the U.S. since 2007.

The show will be presented on Friday Sept. 25 at 9:30 a.m. at the Simonsen Performing Arts Center at Bakersfield College and on Saturday Sept. 26 at 7:00 p.m. at the Dore Theatre at CSU Bakersfield.

A #Healht4all panel discussion will follow each performance featuring local leaders who will speak about the importance of providing access to health care for all Californians.

The discussions will be moderated by Professor Gerald Cantu, Ph.D from Bakersfield College. A five-person panel consisting of local leaders, community experts, and DREAMers will share their stories regarding the challenges undocumented people confront every day because of the lack of access to health care.

These performances are part of a series of events planned jointly between Bakersfield College and CSU Bakersfield commemorating the historical legacy of the Delano Grape Strike. Launched in September 1965, the Delano Grape Strike was one of the most significant labor and civil rights movements in American history. Each campus will feature scholars, films, and historical displays to recount the historical legacy of this labor and civil rights movement fifty years later.

Gary Soto is a nationally acclaimed poet and novelist of young adult fiction. Born and raised in the farm community of Fresno, he has a keen personal interest in Latino youth and first-hand knowledge of the challenges facing low-income immigrant populations, from whose lives he draws extensively in his stories. The blend of humor and Spanglish vernacular in his fiction has captured the largest readership of Latino youth in the nation. His books have been translated into five languages and sold nearly four million copies, with 48 million textbooks featuring his writings. He currently lives in Berkeley.

San Francisco Youth Theatre is directed by the show’s producer and composer, Emily Klion. Based at Brava Theater, SFYT’s ensembles are made up of performers from diverse backgrounds, including DREAMers. SFYT’s mission is to transform youth and communities through the performing arts. In and Out of Shadows has been touring throughout California since 2014 with support from the California Endowment’s Healthy Communities Initiative.

Building Healthy Communities-South Kern is a coalition of over 2,400 residents, youth, businesses and organizations who are working together to create a healthy South Kern. The coalition aims at improving community health and initiate systemic change in the areas of education, environment, recreation and health-access in the communities of Arvin, Lamont, Weedpatch, and the unincorporated areas of Greenfield through a shared vision, goals, and action plan.

In and Out of Shadows was developed in 2012 Cliff Mayotte and “Voice of Witness” oral history program at Marsh Youth Theater, with support from the Creative Work Fund, NALAC (National Association of Latino Arts and Culture), Fresno Regional Foundation and The California Endowment.