I Was Told to “Man Up”: Learning How to Talk About Depression 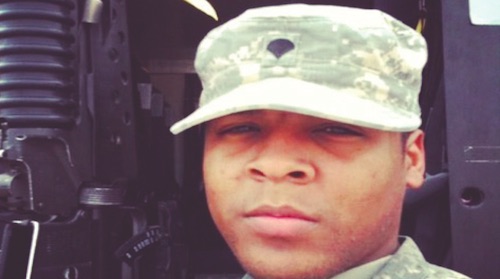 Raised in a dangerous neighborhood without a lot of positive role models, when I was 18 I took it upon myself to make sure I got out of South Central Los Angeles. Joining the military after graduating from high school seemed like the best and quickest way to leave the stress of my environment.

I always knew without a doubt in my mind that I didn’t want to become a stereotype — dropping out of school at a young age, falling into a gang, or getting a girl pregnant. At some point I just came to a realization that there were two paths I could take in life. One was that I could stay in the community of South Central, stuck with the negative emotions that the neighborhood brought out.

Or, I could leave. So that’s what I did.

It’s not that I had no positive influences in my life growing up. My grandparents were a huge part of my life, and they impressed upon me the importance of reading and getting an education, while at the same time giving me a place to escape to mentally. They exposed me to different kinds of books and music that made me realize that there was more to life than just my block. They always tried to give me a new book every time they saw me.

Books became my biggest distraction. They helped me drift away from what was my everyday life. I remember taking the bus to the Downtown Los Angeles Library as a young kid, commuting an hour to and from just to get away from home. I’d only leave the library when it was closing time.

I didn’t feel like I belonged at home or that I could relate to the people that surrounded me in my neighborhood. The answer to everything was to “man up.” South Central was a place where talking about your feelings just wasn’t done.

It was joining the military that really opened my eyes to the fact that I was dealing with depression. Talking to other soldiers made me realize that what I was feeling was completely normal. I realized I wasn’t alone.

I’d never thought to go to counseling until it was offered to me when I was deployed to Qatar. I figured I needed it, not so much because of what I went through in the military but just in general. I came to feel that my mental health was something to be valued. I couldn’t just let all of the negative emotions in my head take over my life.

When I registered myself in the military, I never thought my mother and sister would turn their backs on me for it, or that my girlfriend at the time would have infidelity issues. When I came home I wanted to help my family get out of living in South Central but it turned out they weren’t interested. Coming back home and having to face so many obstacles in my life, I felt that I needed guidance. Going to therapy became my way of getting back into society, instead of turning to alcohol or drugs.

I was eventually prescribed Zoloft, an antidepressant. It definitely helped me relax and kept me in a happier mood. After awhile I no longer wanted to be dependent on the medication so I decided not to take it anymore. But talking to a counselor has really helped me accept everything that has gone on in my life and given me the tools to move forward.

I decided to leave the military and go back to school. The books were calling to me again. The Army started to feel like it wasn’t my home anymore; I was using it to get away from who I was, and away from the world I knew. I’ve been a Pierce College student for the past 5 years and now I’m transferring to Cal State Los Angeles and I’m pre-law.

There’s a reason why some people have to work so hard and why they take so long. There’s a battle you have to fight internally. You have to overcome yourself in order to get to where you’re going.

I’ve tried to get my family out of South Central ever since I left. It’s tough to think about them; they’re in the grip of a certain kind of environment and I can’t get them out of it. So I’m doing what I can to just show them there’s another path.