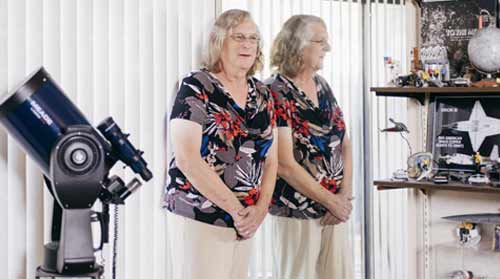 Photo: Michelle Evans transitioned in her 50s. After a surgery, most nursing homes wouldn’t take her, and the one that did demanded she be treated as a man. (David Walter Banks/Newsweek.)

In the rural Pacific Northwest, 50 miles from the nearest city, lives a man who does not want to be found. He came of age during the 1950s, when saying you felt as if you were trapped in a body that you didn’t belong in—you were assigned female at birth, but you identified as a boy, say—would be met with at best dismay and confusion, and at worst brutal abuse.

At 14, with no support system in sight, he attempted suicide, depressed at the physical changes taking place in his adolescent female body. At 19, he began taking testosterone, starting the transition into the person he knew he really was. His family told friends “she” had disappeared and then introduced him as a male cousin who had moved to the area.

He married, became a stepfather and went off to live his life as a man. He never told anyone about his past. Now in his 70s, he remains deeply closeted (even members of his own family aren’t aware of his transition) and deeply isolated (his wife passed away).

Reid Vanderburgh received a call seven years ago from the man, who asked Vanderburgh—a 60-year-old retired therapist and writer who is trans and has worked with close to 500 people on their gender transitions—to help find him a doctor who wouldn’t record his transition in his medical notes.

Even a confidential paper trail of his past seemed too frightening to face. Vanderburgh eventually referred him to a physician and began to visit him regularly, making the 160-mile round trip from Portland, Ore., with his wife, bringing groceries and providing a rare hour of social interaction here and there.

The man—whose identity Vanderburgh hasn’t revealed to anyone—is part of a lost generation within the transgender population, even in a new age of visibility, where Caitlyn Jenner is largely praised and Amazon Studios’ Transparent, a dramatic Web series about a father and retired college professor coming out as transgender, wins awards.

They are the ones who transitioned in the 1950s, ’60s and early ’70s—from around the time the first plastic Coke bottles appeared in stores through John F. Kennedy’s presidency and the Watergate scandal, and long before the advance of sexual-reassignment surgical techniques.

This was before transgender was even a word in the American lexicon; they never called themselves trans or dared associate with those who did. They made up backstories about their lives, moved away and acquired new jobs. Researchers call it “going stealth.” Now they remain cut off from the LGBT community: They cannot be found at community meeings or pride parades, and they don’t show up in surveys or research studies.

Christine Jorgensen and the 1950’s

Evidence of sex change operations can be found as early as the 1920s in Europe, but it wasn’t until the 1950s that they were known in the U.S. In 1952, an Army veteran from the Bronx named Christine Jorgensen became the first widely known trans woman in the U.S.

Born George Jorgensen, Christine underwent surgery in Denmark and made headlines the minute she stepped off a plane when she returned (“Ex-GI Becomes Blonde Beauty,” New York’s Daily News said on its front page in 1952). Soon gender identity clinics opened in the U.S. at universities on both coasts, offering evaluations, hormone therapy and sex-reassignment surgery operations.

But discrimination against transgender people remained rampant. Even the doctors who performed sex-reassignment surgeries presented it as a treatment to get you from one gender to the next (mostly male to female).

After the surgery, you were expected to disappear into your new body, if you wanted to live a happy and productive life. Socializing with other transgender individuals or even discussing the transition was discouraged. Instead, blending into society was emphasized. So thousands who underwent procedures back then ended up going “stealth” for most of their lives.

Those who attempted to live more openly were often pummeled. Marc, a clinical psychologist who works in the Los Angeles area, transitioned in 1979 at the age of 20. (He asked that his real name not be used in order to protect his identity.)

A few years later, Marc started to come out in the comfort of a community led by two trans activists, Jude Patton and Sister Mary Elizabeth Clark, who were based in Orange County, Calif.

They formed support groups and also threw pool parties and barbecues with a wide array of gender-nonconforming people at every stage in their transitions. But then a horrific event convinced Marc it would be better to disappear.

In 1986, his best friend, a trans man, was shot while he showered by the disgruntled ex-husband of his girlfriend. The killer testified at his trial that “a person that appeared to be a man with no penis or testicles scream[ed] at me, telling me to get the fuck out of his house, threatening me, and I had a shotgun in my hand.”

Traumatized, Marc retreated and went stealth for over a decade. It wasn’t until the late ’90s that he remerged and noticed that he had somehow become the oldest trans person people knew—and that there was no one talking about the health problems faced by senior transgender people.

For the past few years, he has been educating LGBT care providers on the subject, covering awareness of special needs and the heightened risk of abuse and neglect this population faces in settings like assisted living facilities.

“Trans people don’t have families of origin. They don’t have spouses, family or children,” he says. “If you don’t have those people advocating for you, you’re far more likely to be abused in a living facility or nursing home.”

For this highly marginalized group, the idea of going into an assisted living facility is a nightmare. Michelle Evans’s worst fears about care facilities came true just after she transitioned.

Evans, a 59-year-old trans woman from Orange County, Calif., knew from a young age that her body and mind were at odds, although it took her nearly a lifetime—over 50 years—to fully transition. About a year after she did, she broke both legs in an accident and was forced to stay in a nursing home after surgery. Except that no nursing home would take her, she says.

When she finally found one that would, it insisted on putting her in the men’s ward. Evans protested and eventually ended up with a room of her own, but she says the doctor in charge told her that identifying as a female was “wrong.”

The doctor eventually stopped Evans’ hormone treatments and even, in a fit of pique, took her off blood thinners—medication she needed after her surgery. Soon Evans developed dangerous blood clots in her legs. A friend finally intervened and took her back to the hospital, where she was told she had only 24 hours to live—the clots had made it to her lungs.

She survived, but the experience left her traumatized. “It’s changed the way I view doctors. I don’t view [care facilities] as a safe place anymore, but a place where I’m cut off from people and that they can do whatever they want.” (She also ended up suing the doctor for malpractice; a settlement was reached in Evans’s favor.)

Study: No Confidence in Care System

In 2013, Tarynn Witten, a professor at the Center for the Study of Biological Complexity at Virginia Commonwealth University (VCU), led a survey investigating chronic illnesses and end-of-life matters in trans-identifying baby boomers.

Thirty-nine percent responded that they had no or little confidence in being treated with dignity and respect as a trans person by health care professionals at the end of their life.

“I do not want to rely on strangers in the medical field that have little to no experience helping people with bodies like mine,” one survey respondent wrote.

“The day that I need a caregiver, I will implement my end-of-life suicide plan,” another declared.
“This is a group of people who are very suspicious because they’ve been abused, and one of the main abusers is the health care system,” says Witten, who transitioned in the 1990s. “Violence and abuse is a kind of radiation background of our lives.”

It also has a severe health trickle-down impact: By avoiding health care professionals, these people put themselves at higher risk of dying from normally treatable conditions like high blood pressure and diabetes.

Advocacy groups and researchers are increasingly aware of the unique challenges faced by a transgender aging population. For example, Services and Advocacy for Gay, Lesbian, Bisexual and Transgender Elders, or SAGE, the country’s only national LGBT organization concentrated on aging, published a report in 2012 on improving the lives of transgender older adults. Witten has also introduced a course on transgender medicine at VCU, which will begin this coming semester.

But the patients will also need to become better health advocates. Walter Bockting, co-director of the LGBT Health Initiative and a professor of medical psychology at Columbia University, says that success in later life for trans people can partially depend on increased interaction with members of their unique community.

“The people who have more support and are connected to other transgender people do better,” he says. “They are better able to cope with the stigma and discrimination that is out there.”

Evans, who has mostly recovered from her ordeal (though there’s permanent damage to her leg), is attempting to help facilitate these crucial connections. On every third Friday of the month, she leads a group called TG Rainbow, which meets in the Church of the Foothills in Santa Ana, one of the biggest cities in Orange County.

Having come from all over the region, members sit on mismatched couches, sharing homemade cookies and stories of their past and current lives.

The meetings include transgender people at all stages in their lives: the man who grew up in the Midwest knowing he was different for 58 years and finally transitioning at 70; the person who identifies as a woman inside, but doesn’t feel comfortable dressing as one, except at these meetings; the 20-something college student, who is there with his mother and says he has finally made an appointment with an endocrinologist to begin the process.

“The only thing you need to transition to is yourself,” Evans says. They all nod in agreement.
Almost 1,000 miles away, Vanderburgh prepares for a weekend visit to the stealth trans man, the one he’s taken groceries to for close to a decade.

Vanderburgh desperately wants to reach more trans people like him. He’s contemplating putting an ad in AARP’s magazine. But for now, as he makes the drive to visit his friend, something simpler and more immediate is on his mind: What if he arrives at the front steps with groceries in hand and the knock at the front door goes unanswered?

Liana Aghajanian wrote this article through a journalism fellowship awarded by New America Media, the Gerontological Society of America and supported by the Silver Century Foundation.