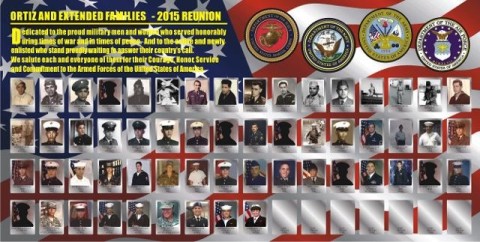 By: Amanda Flores for Coachella Uninc.

COACHELLA — Johnny Ortiz always knew he would join the United States Military. Born into a family chock full of military service members, even at a young age, Ortiz was eager to carry on his family’s rich legacy of patriotism and military service.

“I grew up in a military family full of men. I was fascinated by the many stories told by my uncles and knew someday I too would join the service,” said Ortiz, 69.

The Ortiz family migrated from Mexico to the Coachella Valley in 1915, where the family patriarch, Esabel Parga Ortiz and his wife Maria Montoya Ortiz, first worked as fieldworkers.

Esabel Parga’s sons, Pete and Joseph were the first family members to join the armed forces, and since World War II, members of every generation in the Ortiz family have served in the United States military.

Now, five generations later, the Ortiz family has built a lasting legacy in the Coachella Valley, boasting more than 50 service members in four different branches of the military.

The Ortiz family was honored last month for their bravery and service by Congressman Raul Ruiz, who praised the family’s courage and service to their country.

“For their selfless and honorable service, I am proud to recognize the valor and sacrifices of the Ortiz family,” said Congressman Ruiz on the floor of the U.S. House of Representatives in October.

Ortiz said he was honored by Congressman Ruiz’ decision to recognize his family’s legacy.

“When we found out that Congressman Raul Ruiz was going to recognize us, we were in complete awe and felt complete gratitude,” said Ortiz.

Most recently, Ortiz’s sons and grandsons also joined the military, serving in Afghanistan. His grandsons continue to serve in the Army, Marines, Navy, and Air Force in postings around the world.

Three of Ortiz’s aunts have also served in the United States Armed Forces, one as an Army sniper in Afghanistan, another as a jet aircraft mechanic in the Marine Corps, and the third with the Navy’s military police.

Four years ago, Ortiz realized that despite his family’s rich history, no one had taken the time to collect photos of all their family’s service members. He took it upon himself to start recording and compiling information about his family’s history.

In 2011, Ortiz began to create a banner to showcase portraits of the 50 family service members.

“The purpose of creating the banner was to display all of my family members who have proudly served our country … It started off as a small project, but soon developed into a family history legacy. Tracing my family’s military history made me more interested in collecting the photographs and information for every member.”

Ortiz said he is proud of the recognition his family’s legacy has been receiving.

“On behalf of my family, we will never stop being proud to have served our country; it is in our heart and it is in our blood.”

Amanda Flores, 15, started writing for Coachella Unincorporated earlier this year and she has already covered issues like the drought and fieldworker services. This fall, Amanda is focused on covering issues related to health and prevention in the Eastern Coachella Valley. Amanda, whose cousins serve in the United States Army, said it was an honor to write a story about the Ortiz’s family legacy. View Amanda’s author page here.