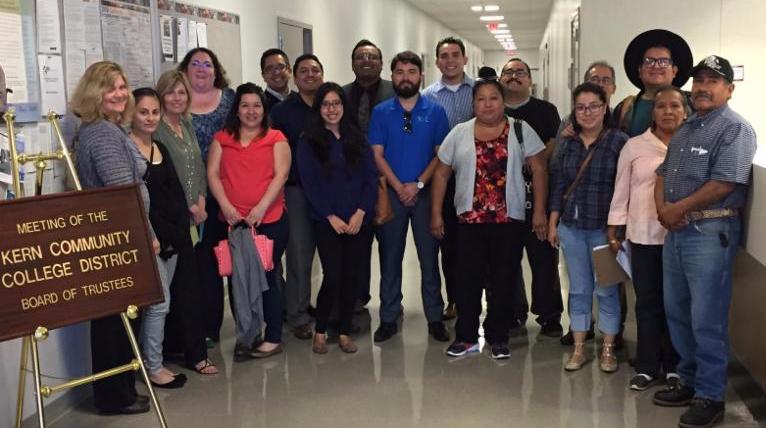 BAKERSFIELD — This past Thursday, community members of Arvin and South Kern went to a Kern Community College District Board of Trustees meeting to advocate for a KCCD facility that would allow the community of South Kern to further their education.

The community of Arvin wants the Board of Trustees to really consider allocating funds for the facility.

Arvin City Council Member Jose Gurrola said, “I’m here to ask for your guys (the board) support and to continue the work you guys have been doing in discussions with the City Manager and City Staff, and hopefully we can provide more opportunity for the residents of Arvin, South Kern and beyond.”

According to Timoteo Prado, the Community Organizer for the Dolores Huerta Foundation in South Kern, the discussion of a college facility in Arvin began in 2006.

Members of the community believe that the lack of a community college in Arvin has directly affected the students motivation for higher education.

Nancy Becerra, a faculty member at Mountain View Middle School for two years, explained that in her time working at Mountain View, she noticed that the students were not motivated to go to college.

“I ended up finding out that my students lack motivation for two reasons. They don’t see people from the community attending a college, and the second reason is there’s no facility nearby for them to attend,” said Becerra.

Laticia Prado said that some of the youth have dreams of higher education, but because of certain circumstances, they cannot pursue those dreams. One of those circumstances is transportation, according to Prado.

Karen Davis, Building Healthy Communities South Kern’s Education Action Team co-chair and faculty member of the Arvin Union School District, explained that the district tries to create a college growing culture for the students of Arvin, and when the students complete high school, they try to make sure they are college ready. She said that it is frustrating that these students can’t go to college because they do not have the transportation to get to Bakersfield College.

A college facility in Arvin won’t only help the youth, but it will help the working adults that want to go to college as well.

Maria Rivas, a mother, explained that she has to work during the day then take night classes twice a week at Bakersfield College. She said the hard part, at times, is to find someone to babysit her son as she is gone late in the night due to the time the night classes end and the distance she has to drive home.

Rivas said that if there was a college campus in Arvin, it would be much more manageable for her to go to college.

The impact of a college in South Kern is believed to be great.

“The study is very supportive of the district’s efforts that would advance the community’s desire of a KCCD facility in Arvin. Such a facility would impact over 45,000 lives that live and work in that particular area in and around Arvin, but indirectly, it also impacts thousands of individuals that commute to the Arvin/Lamont area,” said Arvin City Manager Alfonso Noyola.