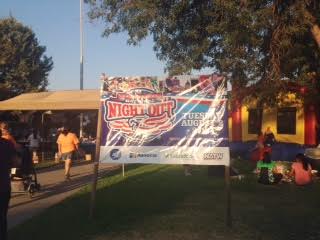 The Arvin Police Department held its second annual National Night Out event on Tuesday afternoon. Hundreds of families, including my own, gathered outside Arvin’s City Hall to enjoy music, food and fun activities.

At the event residents had the chance to informally meet with city officials and get informed of resources including police programs for the community. I felt the event was successful in its goal: building better relationships between police and the people they serve.

Relationships between many local residents and police and other uniformed officials tend to be shaky due to many community members’ constant fear of deportation. For others in Kern, just like in the entire country, the relations have been strained due to perceptions of police brutality.

With all the incidents that have happened recently in the country involving police officers, this event personally made me feel hopeful for building bridges between the two groups. Seeing the vulnerable and human side of police officers made me keep believing that relationships can improve.

“Events like these help to better the community [because] residents get to bond, both children and adults,” said Jazmin Robles, 24, a member of the Arvin City Council.

Arvin’s Night Out was part of a national program held in cities and towns around the country which aims to “promotes police-community partnerships and neighborhood camaraderie to make our neighborhoods safer, better places to live,” according to the initiative’s website.

At Arvin’s event, friendly officials walked around speaking to residents, making it clear that it is important for them to help people understand that their service will always be to serve and protect the community.

Besides spending time with police in a low-key setting, I think Arvin residents appreciated the three hours that the event lasted because it was a chance to spend time with their own families.

“I like this space where families can get involved in the community while having fun with their loved ones,” said Marisa Duran, 31, who attended with her child.

I also appreciated the time I spent with my own family and the chance to meet new people in my community. Despite the hot weather, I danced along people from other cultures to Mexican music and that spoke a lot to me. It reassured my faith not only in Arvin but also the entire nation. The event felt like a big united family.

“I definitely hope to see more events like these in the future,” said Roxana Robles, 41. “They give Arvin something that makes it special.”