A Child of Encarceration 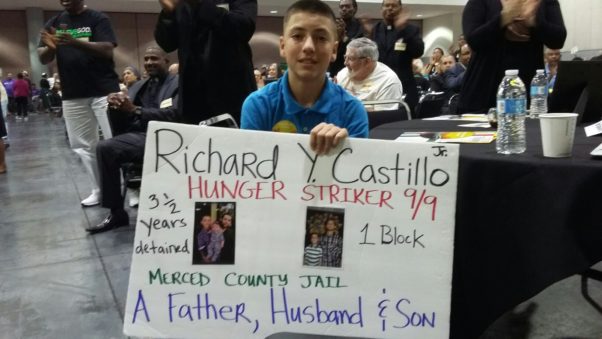 Ed. Note: Jeremiah Castillo, 13, is a Merced resident and aspiring community activist. He was 10 when his father, who is currently fighting a life sentence, was arrested. Earlier this month his father joined inmates across the country in a strike against prison conditions. Jeremiah says he worries about his dad’s safety and that growing up without him has left permanent scars.

In February of 2013, my dad was arrested for evading the police. I had just turned 10 years old and was in the 4th grade. It was in the paper and I remember hearing some of the teachers at my elementary school talking about us.

The day he was arrested, my school’s principal, Mrs. Heupel walked a detective wearing a suit by my classroom and onto the playground during recess. It felt wrong, but I did not know why. When my mom picked me up from school that day she told me my dad had been arrested. We cried and cried together.

That night and many other nights I could not sleep well because I didn’t know when he would come home.

I still don’t know when he will come home.

Everyday my dad is in that jail, I fear he may die because of harsh treatment prisoners are subjected to. This month inmates in prisons around the country, including where my dad is incarcerated, went on a hunger strike  to protest the cruel treatment they receive. I wanted to go on hunger strike too, but my mom says that I am too young. She has joined the strike for me and has not eaten since September 9th.

Last week, when corrections officers at the jail where my dad is tried to suppress striking inmates, my dad was hurt. After we found out what happened my mom tried to get information from the jail, but they wouldn’t tell us anything. I thought my dad might have been dead. That night was the worst so far.

I know people have died inside the jail where my dad is being held. This past July, I sent a letter to the Merced County Board of Supervisors to look into how the Sheriff’s department is conducting raids. I never heard back.

After my dad was arrested, some kids at school whose dads are cops picked on me, saying my dad was a gang member and my family was trash. That upset me and made me really angry. Starting in the fifth grade I begged my mom to home school me, but she couldn’t because she had to work to support my sister and me.

The bullying continued throughout seventh grade. Some kids said they were told not to be friends with me because of my family.

My grades kept falling every single year and I felt like I was drowning in life. It was hard for me to concentrate or feel happy at home or school.

This year, things are different. I am attending a charter school and am no longer a part of the city school district. So far I am doing great. I can focus better and have more time to be me. But there is still a lot of pain I hold inside, pain that stems from being a child of incarceration.

When my dad was home we did everything together. We fished, played catch, rode our bikes, and he helped me with my homework. He even taught me how to cook.

My baby sister Victoria was five months old when my dad was incarcerated. Now, she is four years old.

Since he went to jail, my life has never been the same. Our family feels so broken.

I see how much my mom struggles and my heart hurts. My sister cries for my dad until she falls asleep. She has had to spend all four of her birthdays seeing him in jail through glass. It’s not right. I wish we could give him a hug.

My dad is still fighting his case. They want to give him LIFE. They say he is a gang member and a bad person, but to me, he has always been a great dad and a good husband.

Like a lot of people in Merced – a city known for criminalizing its young people instead of investing in them – he had a hard time growing up. So although the court system and law enforcement label him one way, I know they are wrong about my dad.

I am hoping my story will open eyes and soften hearts and bring attention to the plight of prisoners. When our loved ones suffer, we suffer too.

I will never regain all the years I have missed out with my dad, and neither will my little sister. Incarceration has permanently scarred me for life. Jeremiah has been in avid contributor of We’Ced since 2014.  In addition to being a football player, video game enthusiast, and proud big brother, Jeremiah spends most of his free time advocating for various issues that affect young people in Merced. He plans to become a full-pledge Youth Reporter as soon as he turns 14.