‘We can fight back:’ Community comes together to learn how to tackle issues undocumented immigrants face in Kern County

What did District 4 candidates think of the event?

It’s always good to hear from all perspectives. One thing I found interesting right off the bat was there was a speaker who admitted this morning that this is a difficult situation. She didn’t have a perfect answer, which probably no one does. But it’s that type of honest that is needed on both sides of the issue to make progress. I admired her for saying that. The other thing that struck me, I want to know more about this public charge issue.  Lastly, I would say that today gave me confidence. There is some common ground that both sides can build on and other parts that made me think we are so far apart on this, and they are talking past each other. But I’m hopeful. There has to be a better answer than the current system that in place today. I hope we find it.

Most of today has to do with education — education to the individuals that come in contact with undocumented families or with families who have a member who is undocumented. It is important to educate undocumented individuals as to what to do, but they’re kind of in hiding. So that leaves it to us. That’s the importance of today is get educated. Now we’re are a lot of people that are more knowledgeable  about how we can at least advice somebody on what to do. That’s why this is so important, and I’m happy to see so many people here of all walks of life, it seems. The people that were there were the ones that needed the education on what to do. We don’t need an education on what’s wrong, because we know what’s wrong. It has to change in the legislative level, and that comes from voting. If you do not vote the right people, we’ll never change this immigration nightmare. That’s what is has become — a nightmare.

I thought the event was very informative, and I think that it’s very important this kind of information is made available to our communities so they know what to expect on immigration policy. This is a very difficult time for our communities that are being impacted by this. I thought it was a great event. I think we should have more more of these in each of the towns here in Kern County. If we have one in every town from Delano to Arvin, people would be more informed and let them know how it would impact them in any way.

When an immigration officer conducts a warrantless arrest, it’s usually because the person has said too much or wasn’t aware of their rights. But what if every undocumented immigrant carried a letter addressed to themselves and signed by an attorney, instructing the person to remain quiet during questioning and instructing the officer to stop the questioning?

Could the letter protect undocumented immigrants from being arrested and detained? Peter Schey, the executive director of the Center for Human Rights and Constitutional Law, thinks so.

Schey thinks a project like Cartas de Protection is necessary.

“It’s all based on racial profiling,” he said of Immigration and Customs Enforcement arrests. “It’s completely illegal. Officers are never going to question someone who looks European.”

Schey has been working on the project for a year and is almost ready to execute the project.

He has worked with 10 lawyers, who have agreed to each sign 1,000 letters, which will be distributed to people in Los Angeles. The service is free. All people have to do is sign up.

However, there are still some kinks to be figured out.

If the letter doesn’t protect undocumented immigrants, (which Schey is confident it will) Schey would like to have attorneys available to represent the immigrant out of custody, “but nothing more than that,” he said. He’s still working on this portion of the project.

Overall, Schey is confident this project can help immigrant communities.

“(Cartas de Protection) is one way to work as a community to decrease fear,” he said.

The audience expressed interest in the project, and a number of people asked Schey if he could help Kern County start a similar project. He said if the project is a success in LA, he would like to help start more projects in other cities.

“I think (Cartas de Protection) is a really good idea,” GBLA employee Valentin Narvaez said, with hopes to execute the project locally. “I hope we can help Peter with that idea.” 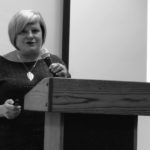 “The proposed rule is not as evil as the leaked version was,” she said, “But that’s the end of the good news.”

Although it’s “not as evil,” there are some radical changes, she said.

The Department of Homeland Security has changed the definition of public charge from someone who relies on the government for main source of support to someone who participates in a health, nutrition or housing benefit to support work.

In the proposal, the DHS is also considering more factors that make it harder for low-income and moderate-income people to pass the test. Immigrants fail the test if they are low-income, aren’t proficient in English or have a medical condition.

Lastly, the department is considering more benefits as a public charge, such as housing and non-emergency MediCal.

But it’s not too late, Lessard said.

“We can fight back against public charge,” she told the audience.

Last Wednesday initiated a 60-day period for the public to submit comments at regulations.gov/comment. DHS is required by law to review the comments and address them before issuing a final rule. 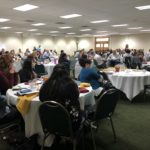 The conference is part of GBLA’s new Immigrant Human Rights project, according to Narvaez. There are plenty of outreach projects in bigger cities throughout California, but not many in Kern County, said Narvaez.

“I hope the community takes this information and spreads the information to others,” he said. “I hope the issues everyone faces together, not just immigrants, are better understood, and some of the misinformation that’s out there . . . was cleared up today at this conference.”