Bakersfield High students speak up about safety at school

Q: How do you feel about the increased security measures?
A: We see security guards and campus police a lot, and I don’t think that more vehicles will make a school of 3,000 kids a bad place to learn. I think it’s positive that we have officers that are here for us, and security guards that are here for us and to protect us. But I think this was a situation that only involved three kids, and those kids don’t actually tell us who we are as Drillers. It’s our character more than our actions that show who we are as a school. 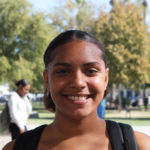 Leena Killbrau is a junior at Bakersfield High.
BY PAIGE ATKISON

Q: How do you feel about the increased security? Do the extra patrol cars make you feel safer?
A: Honestly, no. The security guards just talk. They’re not supposed to just talk, they’re supposed to monitor the school. They’re supposed to be making sure the students are in class and that they’re okay. What frustrates me was that the security wasn’t there until after a student was stabbed. 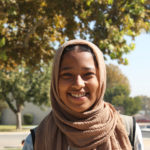 Fatimah Ahmed is a junior at Bakersfield High.
BY PAIGE ATKISON

Q: Do you feel adequately protected?
A: I think since I don’t associate and have problems with people I’m safe. I don’t feel any less safe here.
Q: Do you think the school is a generally safe place to be?
A: Generally yes, but I feel like the security guards could do more. Because when they see people walking the hallways, they notice that they’re not in class but they don’t say anything. But I still feel like the school is pretty much safe.
— Junior Fatimah Ahmed, 15

Two students were arrested Friday after a Bakersfield High student was stabbed on campus the day before. The stabbing victim was one of at least four people involved in a violent altercation in a crowded hallway, according to video obtained by South Kern Sol.

The video shows at least three students initially involved in a fight as a crowd of others stood on the sidelines and watched. One student involved in the altercation can be seen holding an object and thrusting it into a student’s body as they scuffled.

The student who sustained a stab wound to his shoulder has since been treated and released from a local hospital, KHSD’s communication office Erin Briscoe-Clarke said Friday morning.

KHSD police were able to identify the participants in the fight. Two BHS students were arrested for assault with a deadly weapon and possession of a weapon on campus, according to KHSD.

Officers have recovered the knife used in the stabbing.

On Friday, there was extra security and police on campus, Briscoe-Clarke said.

Some students are trying to remain positive after the incident. 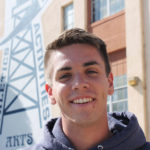 Tate Turner is a senior at Bakersfield High.
BY PAIGE ATKISON

However, some students are still fearful.

“I don’t feel safe at all,” BHS senior Melissa Berlanga said. “I wasn’t sure if I’d come to school. What if it happens again?”

“It concerns me because it’s not a random person, it was a student,” Berlanga continued. “It makes me think that anything can happen. A student could bring [a weapon] and hide it in their backpack. Next time it could be a gun.” 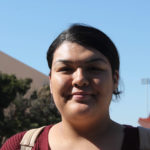 Melissa Berlanga is a senior at Bakersfield High.
BY PAIGE ATKISON

Bakersfield High staff has complained to board members in public meetings that fights have become a common occurrence on campus. At least 10 teachers at Kern High School District campuses have been assaulted by students this school year, district officials said in April of 2018, reported The Bakersfield Californian.

“My guess is there’s probably more assaults on teachers than 10,” KHSD trustee Mike Williams told The Californian at the time.

In an op-ed printed by The Californian, Katie Price, a counselor at BHS, wrote about how students are afraid to go to school.

“I received a call from a parent of one of my Bakersfield High School freshmen last week,” she wrote. “’My daughter needs to go on independent studies,’ she said. ‘She hates coming to school. She’s afraid, because there are fights every day on campus and the students are rude to the teachers and the classes are out of control.’ I wasn’t surprised.”

Students say they are skipping days of school because they feel unsafe on campus, according to data released by the district during a community forum in September.

Overall, 10 percent of the district’s students surveyed said this year they skipped school at least once in the last 60 days because they felt unsafe at school or on their way home from school. It represents a three percent increase from the 2016-2017 school year.

RELATED: At KHSD, suspensions down, but students feel more unsafe