Mesa Verde to remain open for at least one more year; advocates raise money to pay bonds of those detained

The Mesa Verde ICE Detention Center is going to remain open for at least another year, according to a contract between the GEO Inc., the contractor for Mesa Verde and the Department of Homeland Security. 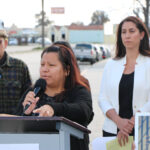 The detention facility was set to close March 19 after the city of McFarland did not renew its contract with GEO Group, said Rosa Lopez, co-chair of Rapid Response Network of Kern, a group of human right activists, community organizations and community leaders working to assist immigrant communities in Kern County.

If a new contact was not founded, Mesa Verde’s approximately 400 detainees would have been transferred to other facilities across the state and nation.

“There’s a lot of decisions being made about the fate of the people imprisoned in Mesa Verde behind closed doors,” Lopez said Thursday at a press conference in front of Mesa Verde. “Until yesterday, we were uncertain about what would happen to almost 400 detainees at Mesa Verde if the facility closed.”

Before the new contact, RRN of Kern started a campaign to raise money for detainees who have been granted bond but are unable to pay the amount.

“We roughly estimate that more than 80 detainees are currently eligible for bond, and among those, many that have been granted bond by an immigration judge or an ICE officer, continue to be detained simply because they are unable to afford to pay that amount,” said Ambar Tovar, an immigration attorney for the UFW Foundation. 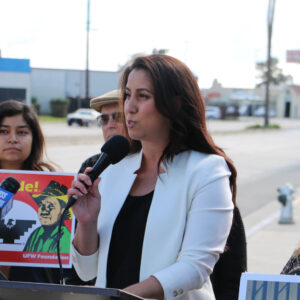 UFW Foundation attorney Ambar Tovar speaks at the press conference in front of the Mesa Verde Detention Facility about the detainees who are granted bond but are unable to afford it.
PHOTO BY BRYANA LOZOYA

Although the detention facility remains open, the organization is continuing its effort to raise money.

Tovar said at the press conference, “Detainees who are unable to pay their bonds to be released from detention could spend days, months, and even years waiting to make their way through the immigration process.”

Bryana Lozoya is a youth reporter for South Kern Sol. Lozoya is student at Bakersfield College and writes for The Renegade Rip.