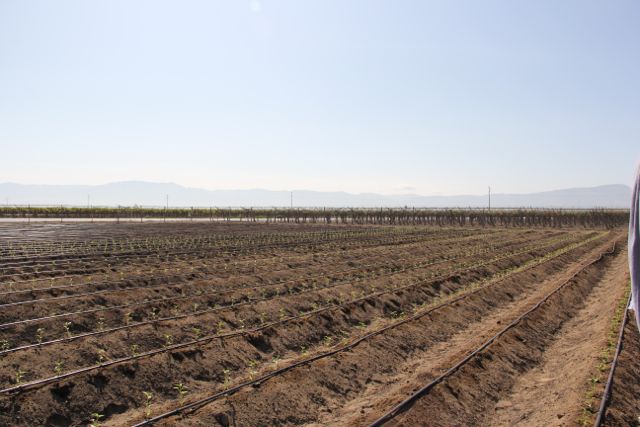 In an effort to protect “human health and the environment,” state officials issued temporary recommendations in November for growers in California regulating the use of chlorpyrifos.

1. Banning all aerial applications of chlorpyrifos.
2. Discontinuing chlorpyrifos’ use on most crops.
3. Restricting chlorpyrifos to “critical uses” on crops for which there are few if any alternative pesticides.
4. Requiring a one quarter-mile buffer zone during all allowed applications of the pesticide and for 24 hours afterwards.
5. Requiring a 150-foot setback from houses, businesses, schools and other sensitive sites at all times, regardless of whether the site is occupied at the time of application.

The cancellation process could take up to two years to take effect in California, according to Charlotte Fadipe, a spokesperson with DPR. In the meantime, growers can continue to use the pesticide while the ban takes effect but are encouraged to use restrictions DPR has recommended.

“It basically means the growers have two years to come up with an alternative,” Fadipe told South Kern Sol. “We really want people to transition away from these pesticide. We want people to embrace safer alternatives.”

Chlorpyrifos is an effective insecticide that tackles a variety of pests that threaten crops such as grapes, almonds and oranges.

Grapes, citrus and almonds — the crops that use the most chlorpyrifos — were Kern County’s top three commodities in 2017, according to the 2017 Kern County Agriculture Report.

DPR plans to move forward with the cancellation process, which could take up to two years, according to a news release. DPR will consult with county agricultural commissioners and local air pollution control districts before filing for cancellation.

However, advocates are skeptical of the process.

“I’m glad to see this administration has started the process to protect children from this pesticide,” said Senator María Elena Durazo of District 24, who has authored Senate Bill 458, a bill introduced in February that would prohibit the use of a pesticide that contains the active ingredient chlorpyrifos.

“Based on past regulatory processes, I remain concerned that the end date remains vague,” Durazo. “However, since the announcement strongly suggests an intention to complete the process within two years, I will amend my legislation to align it with the Governor’s intentions.”

The decision, which is likely to receive opposition, according to advocates, must go before a judge for a hearing. Then DPR will have 100 days to make a decision, according to Byanka Santoyo, a community organizer with the Center on Race, Poverty and the Environment.

EarthJustice, the nation’s largest nonprofit environmental law organization, told The Washington Post it will continue to push for legislation to ban the chemical because it questions whether DPR will follow through on the ban.

“It’s been like pulling teeth to force DPR to begin the cancellation process for chlorpyrifos,” EarthJustice attorney Greg Loarie told The Post. “Until we know that chlorpyrifos is gone for good, we are going to keep pushing as hard as we can in as many places as we can.”

Santoyo said DPR has the authority to ban the pesticide immediately, but the organization has decided to go through the cancellation process instead. However, she is confident DPR will follow through with the ban.

“The EPA and our Governor are very opposing of this pesticide, especially because it affects our children,” she said.

DPR has conducted research on the pesticide, and research shows it can affect the nervous system, can have neurodevelopmental effects and can be a reproductive toxin if exposed, Fadipe told South Kern Sol in November.

A UC Berkeley study found that the group exposed to the highest levels of chlorpyrifos or an organophosphate during pregnancy was associated with a seven-point drop in IQ scores in seven-year-old children. A Columbia University study found that three-year-old children with higher prenatal exposures to chlorpyrifos were more likely to experience delays in development, attention problems, ADHD problems and pervasive developmental disorder problems. And a UC Davis study found that mothers who live within a mile of fields where chlorpyrifos and other organophosphate pesticides were applied had a 60 percent higher chance of having children with autism spectrum disorder.

To help growers transition to a safer alternative, Governor Newsom will propose $5.7 million in new funding in the May Revision budget proposal to support the transition to safer, more sustainable alternatives, and plans to convene a working group to identify, evaluate and recommend alternative pest management solutions, says a news release.

In April, chlorpyrifos was formally listed as a “toxic air contaminant”, which California law defines as “an air pollutant which may cause or contribute to an increase in mortality or an increase in serious illness, or which may pose a present or potential hazard to human health.”

In 2015, DPR designated chlorpyrifos as a “restricted material” that requires a permit from the county agricultural commissioner for its application.

California is not the first step to make the move to ban the pesticide. Hawaii had decided to ban it and is giving growers till 2022 to find alternatives. New York is also in the process of banning chlorpyrifos, Fadipe said.

“This means we are going to a good direction,” said Santoyo. “The government is finally listening to us, and we have gone back many times to Sacramento and talked to our legislature and talked to the EPA and DPR about these issues.”

She continued: “There is hope, and they are listening to us now.”

South Kern Sol is a youth-led journalism organization in Kern County. In their stories, youth reporters shine light on health and racial disparities in under-served communities across Kern. For more stories by South Kern Sol, head to southkernsol.org.