‘Do they really know us’: Sikh community says park will give sense of belonging; don’t feel support from city officials, advocates say 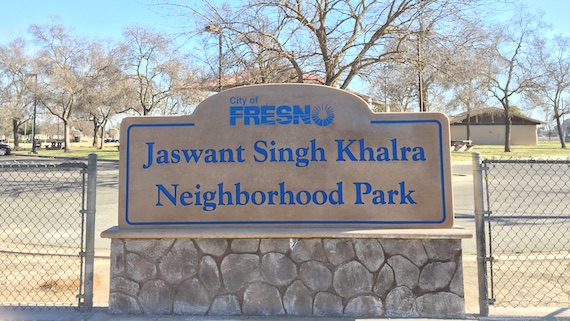 After working with city officials, committees and community partners for almost two years, the Bakersfield Sikh community continues its efforts in naming a park of a Sikh civil rights leader; however there has been a recent halt to the process.

The city council was set to vote to either name or not name a new park after human rights activist Jaswant Singh Khalra on Oct 16; however Sikh community members asked the vote be removed from the agenda and postponed, according to council member Chris Parlier, whose district includes the park in need of a name in Southwest Bakersfield. It remains unclear why advocates requested the vote be postponed.

“I was in favor of supporting the Sikh community and whatever they felt is best and what they want to do,” Parlier said.

The idea to name a park after Jaswant Singh Khalra, a human rights activist who gave attention to a genocide taking place in Punjab and was killed by police in 1995, was originally proposed by youth in the Sikh community after Fresno successfully did the same in 2017. The initiative has since been taken over by Sikh business leaders, advocates say.

Harvir Kaur, a Jakara Movement student who was part of a group of students to first propose naming a park after Jaswant Singh Khalra, said a park honoring the human rights activist in Southwest Bakersfield where a large Sikh population resides would give her a sense of community in her “own home.”

“Southwest Bakersfield has immigrants from Punjab, and it lacks representation of who the Sikh community is,” Kaur said. “Sure people see us, but do they really know us?

Because Kaur was part of the initial proposal, she has seen the initiative through its ups and downs.

“Since the beginning, the city council hasn’t shown much interest in our initiative as all,” Kaur said. “I feel they  have been pushing it off for a really long time.”

Throughout the past year and a half, the idea has bounced around from city council meetings to committees and has received pushback from some community members. Kaur believes the hold up is a result of racial tensions.

“(The city) is pushing it off because they don’t want to deal with the tension,” she said.

In previous meetings, other suggestions have been made. Instead of naming a park after the human rights activist, for example, Mayor Karen Goh suggested in a recent meeting installing a plaque at a park in honor of Sandeep Dhaliwal, the first Texan Sheriff Deputy who was killed during a routine traffic stop. Kern Sol News reached out to Goh multiple times, but she did not respond.

After it took Fresno just three months to rename a park after Jaswant Singh Khalra, local youth from the Bakersfield chapter of the Jakara Movement, a statewide organization that creates a “new generation of Sikh leadership through individual development and community building,” began their efforts in March of 2018 to do the same.

“(A park named after Jaswant Singh Khalra) is emblematic of a Bakersfield that embraces all of its communities and diversity and celebrates values we all hold,” said Jakara Movement Executive Director Naindeep Singh, who helped lead the effort in Fresno and Bakersfield. “And it’s really a human right and activist that celebrated truth, honor and dignity above all else.”

They proposed to the city council to rename Stonecreek Park in 2018 and rallied support from the Sikh community for the renaming.

“They wanted something to reflect their community,” Singh said. “They wanted to show they have a place in this community.”

Pawanjeet Pangalia, a member of the Jakara Movement, said Jaswant Singh Khalra is the reason “why we are here today.”

“Because of all the wrongdoings done by the Indian government,” Pangalia said. “He helped relacted people because he wanted to help them escape persecution. Having a place named after him would commemorate him.”

After youth made the initial proposal, they has received pushback from community members and put their efforts on pause. The Sikh community renewed its efforts in April of 2019; however this time they proposed to name a new neighborhood park that is planned to be developed just 300 yards south of Stonecreek.

“I am supportive of our Punjab community,” The Bakersfield Californian reported Parlier saying at a city council meeting in April. “I think this is a potential opportunity for recognizing their contributions to the city of Bakersfield.”

In April, Parlier forwarded the request to the city’s Planning and Development Committee. Prior to that, the city council suggested naming the park Unity Park, according to The Bakersfield Californian.

Dianne Hoover, the director of the Recreation and Parks Department for the city of Bakersfield, said the city does not have the ability to rename a neighborhood park. The naming rights lie with the park developers, and most of the time, the developers name neighborhood parks after neighborhoods.

There are five different developers working on the new park near Akers and McKee roads, according to Hoover.

“We won’t have funds to develop that park for another three yeras,” said Hoover. “It’s not an emergency to name the park yet.”

The city is currently working to develop a park naming policy, according to Hoover. City officials have submitted the first draft of the park naming policy, but Hoover said some revisions need to be made. She is uncertain when the policy will be finalized and sent to the council for a vote.

“There was such backlash of renaming an existing park,” she said. “Typically this is not done, especially in a neighborhood park.”

How Did Fresno Rename a Park so Fast?

The Fresno City Council voted to rename Victoria West Park after Jaswant Singh Khalra in 2017. It took just a few months from the proposal to the approval of the name.

“Their process was totally different,” Hoover said. “It was much more easier to go through. They kind of did it really quick and public didn’t have time to react.”

The name Victoria West had no significance, according to Fresno city council members. It was named after a neighborhood.

Oliver Baines, the Fresno City councilman who oversaw the district that included the renamed park in Fresno, said the city of Fresno does not have a park naming policy.

“That’s just over complicating a pretty simple process,” he said.

“The (City of Bakersfield) can do this if they want to do it,” Baines continued. “If their policy is developers name parks, then why do they need a park naming policy? Obviously they don’t want to do it, and what happens in government is they run it through a bureaucratic process.”

When members of the Jakara Movement proposed the idea to the Fresno City Council, they were asked to do just a few things. Baines asked them to host community meetings to gather support; come up with a name; and make a proposal before the city council. The youth informed and educated the city council and community on who Khalra was and his significance to the Sikh community.

“It wasn’t difficult,” Baines said. “It was literally one of those things for us where you think, ‘This is an incredible human being and he deserves to be recognized.’ Once you learn how amazing he was, I don’t know what the pushback is.”

Fresno City council member Esmeralda Soria helped with the effort. She called the process simple: an idea was proposed, community members gained support, and the board voted to approve it.

“We have to stand behind community members on issues that might be controversial,” she said. “I think the significance behind it now is we are telling the Sikh community they have a place in our community. It’s unfortunate the pushback that is being presented in Bakersfield.”

In Fresno, community members who use the Victoria West Park most found the idea favorable, said Soria.

“(The park) gives our Sikh community a sense of belonging,” she said. “We are a community that values diversity. There is ownership there. I think it’s beautiful.”

The city received no pushback for the park renaming. Both Soria and Baines said if they did, they would have still supported the renaming.

“It was the right thing to do,” Soria said. “The Sikh community made a strong argument why it was important and historical significance. We value that. That’s what is important to us.”

Featured photo: A park in Fresno was named after Jaswant Singh Khalra. A new sign has been installed at the park.