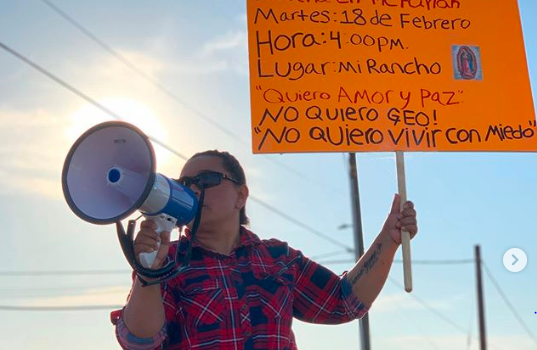 After waiting a long four hours of comments from GEO Group, McFarland residents opposing the expansion of GEO cheered Tuesday in celebration when the McFarland Planning Commission voted 2-2, rejecting the motion to allow GEO to turn two prisons into immigrant detention centers.

The meeting was met with hundreds of protesters to stop GEO from coming into their community as well as counter-protesters welcoming GEO.

“The strength is in community. It’s important to not be afraid and to have faith in the people, in God, and in the work that you are doing,” says Teresa Figueroa, a McFarland resident. “Let’s never stop fighting.”

Entire families came out to let the McFarland Planning Commission know that they stand strongly against GEO’s expansion and expressed that they don’t want to live in fear.

“These businesses receive multi-million gains that are generated from the root of drama and human suffering they are putting a dollar sign to our brothers and sisters who are undocumented,” said McFarland resident Cynthia Garcia.

This most recent meeting provided an adequate translator as a large section of the audience were Spanish speakers. The meeting beforehand had no proper translator and used one of GEO’s employees to translate.

As the meeting started a GEO representative went to the podium and spoke, “In the event that our request is not approved, there will be a loss of 348 jobs.”

“It’s  important to note that the residents of McFarland, the people that are affected by this expansion are not the ones that are going to be benefiting from these jobs,”  says Ambar Tovar, an attorney with the UFW Foundation.

“The issue with [GEO’s request] expands beyond the city of McFarland,” Tovar added. “It’s an issue that has a great likelihood of affecting the entire Central Valley region and residents are right to believe and fear that with more beds created, there’s going to be a trickling effect that ICE would have the tools to incarcerate more people. I think we should celebrate this victory, but we need to build on this momentum because the fight is not over.

Tovar said GEO has made it clear they intend to invest in making sure that this expansion takes place.

Tovar added that this momentum that residents of McFarland have initiated needs to expand to the neighboring communities to ensure that this expansion doesn’t happen.

If the motions were to be approved on Tuesday, GEO’s detention capacities would increase to 1,400 spots.

“This gives place to two different situations. The first unfortunately is a sad one that causes devastating effects to families and the second one which is the most convenient GEO is taking advantage, it’s the multi-million gain that they are going to receive,” added Garcia.

“The community of McFarland is not guilty of the inefficiency of a bad administration. We want to hear solutions and propositions that are not going to violate the dignity of the most vulnerable families,” said Garcia.

Marco Rodriguez is a youth reporter from Delano for South Kern Sol.