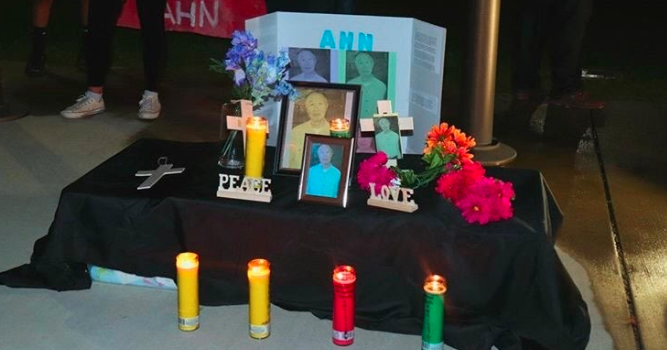 Community members from across the Central Valley gathered for a vigil outside Mesa Verde Detention Facility Thursday night to honor Choung Woong Ahn, a 74-year-old man who died in ICE Custody at the Mesa Verde Sunday.

Ahn was taken into ICE custody in February and was especially vulnerable to COVID-19 as he had diabetes, hypertension, and several heat-related issues, according to the American Civil Liberties Union. A group of attorneys made an urgent plea to release Ahn and others with serious pre-existing health problems who are at increased risk for severe COVID-19 illness.

“Mr. Ahn was a good guy. He loved to joke and laugh,” said Ahn’s dorm mate Asif. “He was a very kind person, loved to share whatever he had with others. In our dorm, we would look out for him since we knew his medical conditions, and since he was an older gentleman. This could have all been prevented. ICE and GEO are both responsible for what happened.”

Advocates say his case is a clear example of a medically vulnerable individual who was denied their right to life by ICE and GEO. The preliminary cause of death was suicide; however, ICE is investigating the case, according to a statement by the agency.

“I spent time in the dorms with Mr. Ahn. He was a kind person,” said another one of Ahn’s dorm mates, Levi. “He would take care of others. Given his age, we would look after him to make sure he had medical attention if he wasn’t feeling well.”

Ahn was lawfully admitted as a permanent resident to the U.S. in 1988, according to ICE. In 2013, he was convicted for the offense of attempted murder and was sentenced to 10 years in prison.

Ahn entered ICE custody on Feb. 21, 2020 upon his release from Solano State Prison in Vacaville.

At the time of Ahn’s death, he was in custody pending removal proceedings.

Tania Bernal, an Organizer with California Immigrant Youth Justice Alliance, said Ahn should have never been detained since he served his time.

“He paid his debt to society,” Bernal said. “He served his time. There was no need to have him detained in Mesa Verde. He could have fought his case from outside.”

“We do not need the agency which created the circumstances for this death to conduct an investigation,” the letter says. “The reality is clear for everyone to see: ICE is acting as the judge, jury and executioner in these cases.”

“We need action and we need it now.”

Anh’s death marks the second death in California detention facilities in the month of May. The first was Carlos Escobar Mejia, a 57-year-old man who died from exposure to COVID-19 at the Otay Mesa facility, owned and operated by CoreCivic, according to the letter.

“We need an investigation into what took place by an independent agency, with the goals of protecting the health and safety of the individuals in those facilities,” the letter says. “That investigation should come from your office.”

Bernal said she hopes the state will take action against the for-profit corporations.

“We hope that Governor Newsom and Attorney General Xavier Becerra stop these private corporations from operating,” Bernal said. “We know they have the power, but they choose not to. They have blood on their hands.”

Both Bernal and Levi said detainees at Mesa Verde are “scared” to seek medical care at the facility after Anh’s incident.

“Given what happened, now others do not want to go to Medical because they are scared,” Levi said. “GEO failed Mr. Ahn, and they need to be held accountable.”

Community members are holding a car rally outside Mesa Verde Friday at 3 p.m. to stand in solidarity with Anh and his family.