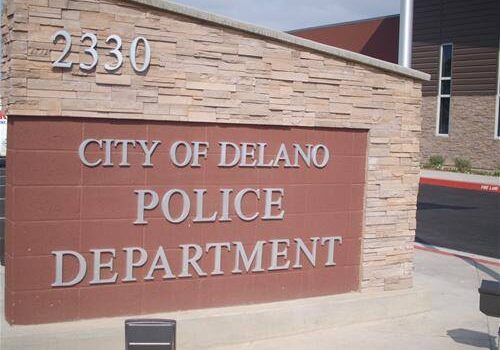 The City of Delano began installing surveillance cameras around town last week as a way to help the police department with investigations.

Delano’s Chief of Police Robert Nevarez has said before there aren’t enough witnesses to Delano’s crimes that are willing to come forward to help solve crimes.

“The claim is these cameras will assist when crimes occur,” said City Council Member Bryan Osorio.

Last year, the Delano Police Department considering implementing a license plate reader technology as a way to solve crime. Nevarez said the technology could be used as a tool to find leads or evidence is facing an unsolved murder case; however, the City decided against the technology after much push back from community members.

“I already knew there was a lot of murders (in Delano),” Nevarez said at a May 23, 2019 meeting. “I didn’t know when I came to Delano how many were unsolved. A lot of the murders in the city go unsolved.”

The idea to purchase and install the cameras was first discussed in February 2020 and again at last Monday’s City Council Meeting.

The City purchased 20 cameras, costing more than $154,000. These cameras will have a full 360 view of the area in which they are placed, council members said at Monday’s meeting.

“I think it’s wonderful that the city is taking a more progressive stance on combating crime in the community,” said Paola Garcia, a student at the Delano Joint Union High School District. “These cameras will not only discourage crime, they’ll help pinpoint those responsible to prevent more incidents in the future.”

However, some think the funds could have been used for other resources.

“I believe that the cameras are not the solution,” said Parnett Sahota, another student at the DJUHSD. “The $150,000 could have been used to better the parks, provide more resources to the high schools, or help the community.”

Council Member Joe Alindajao said the park cameras could be part of the City’s anti-gang campaign and actions to decrease gang incidents and violence.

The conversation comes one month after 11-year-old Makeliah and 12-year-old Elayna were shot and killed at a birthday party in Delano. A shooting also took place at the beginning of the year at Cesar Chavez Park, where 19-year-old Nayeli Carrillo Gonzalez was shot and killed.

In just six months, there have been more than eight homicides in Delano, which some say are all gang related. In Delano, there has been an increase in gang-related shootings from 20 incidents in 2018 to 23 in 2019, according to 23 ABC news.

“(This) also has to do with ensuring children’s safety,” said Osorio.

No decision has been made regarding the park cameras. The issue was tabled and will be discussed at the next City council meeting.

The council members also discussed the urgency of wearing face masks or face coverings to protect themselves and their neighbors during the pandemic.

Kern County has nearly 25,000 COVID-19 cases, and cases only seem to be rising. In Delano, there are a total of 1,462 cases, according to the Kern County Public Health Department.

“If there’s one thing we can do as community members, it is stop the spread in our own community,” said Alindajao. “Lets not forget about the hundreds of folks of our own County that have died who would have not otherwise died if it weren’t for this pandemic.”